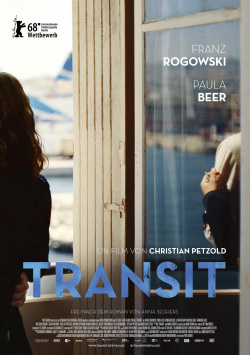 The German troops keep advancing and are now already outside Paris. For Georg (Franz Rogowski), a German refugee, this means he desperately needs to get out of the city. Shortly before leaving for Marseille, he takes the papers and notes of the writer Weidel, who has committed suicide in a Paris hotel out of fear of the occupiers. Once in Marseille, he tries to get a transit visa to Mexico. To do so, he assumes the identity of Weidel, who already had the necessary papers. It actually seems that Georg will be able to start a new life in a few days. But then he meets the mysterious Marie (Paula Beer) and falls in love with the young woman - and that changes everything.

For this free adaptation of Anna Seghers' novel Transit, published in the 1940s, director Christian Petzold has come up with an interesting and yet very effective stylistic device: He keeps the basic structure of the book, but lets the story take place in the present. This seems a bit strange in the first moments, but it makes sure that the distance to the viewer, which is automatically built up by the clothes or the equipment, is completely omitted. You see a world that is familiar to you, but still seems strange and threatening. This creates a particularly oppressive atmosphere that is hard to escape.

Even in the many quiet moments, set in what is in itself a very idyllic Marseille and characterised by lots of bright, hopeful colours, there is always an ominous shadow over the proceedings. Petzold manages very well, especially in the first half of the old story through this narrative method to give current relevance. Of course, there are clear references to the current refugee crisis. But the film is much more than just a depiction of this global problem. It is also a very intimate, personal film about a man driven by the desire for his own survival to a lie with which he increasingly struggles.

Transit is an exciting film in many ways, but also a difficult one. You have to be able to engage not only with the modern setting, but also with the pacing and some somewhat artificial-sounding dialogue to enjoy the film and appreciate its meaning. For those who enjoy such challenges and appreciate sophisticated program cinema from Germany, the work can definitely be recommended. Worth seeing

Cinema trailer for the movie "Transit (Deutschland/Frankreich 2018)"
Loading the player ...