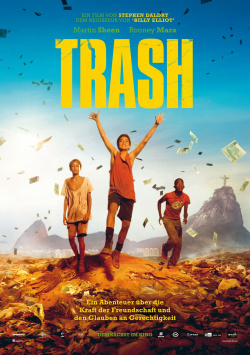 For Raphael (Rickson Tevez) and Gardo (Eduardo Luis), two boys from a favela in Rio, rummaging through large mountains of garbage is part of their daily work. Here they look for anything that can somehow be turned into money or that they can use for their survival. But the discovery of a wallet changes their lives abruptly. When the police, led by the ice-cold Frederico (Selton Mello), show up and promise a princely reward for the finder of the wallet, the friends suspect that they have made a very special find. Together with their buddy Rato (Gabriel Weinstein), they try to uncover the mystery of the wallet's owner, unaware that they are becoming part of a large-scale conspiracy and putting their lives in real danger. Soon the boys can trust no one. Only in the two American missionaries, Father Julliard (Martin Sheen) and his young assistant Olivia (Rooney Mara), the boys find important allies who could help them in their fight against the superior enemies...

With Trash, the film adaptation of the novel of the same name by Andy Mulligan, director Stephen Daldry (Billy Elliot, The Reader) has created something very special: he tells a story about street kids in Rio without falling into the usual consternation mode. He creates a world full of poverty, corruption and injustice without plunging the viewer into too deep a depression. This is partly thanks to the wonderful screenplay by Richard Curtis (Love Actually...), who lightens up the action with lots of wonderful wordplay. On the other hand, it is due to the three young main actors, who exude a very special attitude towards life: although they live in the simplest of circumstances and have to climb around in mountains of rubbish every day to survive, they enjoy life and never give up hope for a happier future.

This gives the film as a whole an infectious, extremely life-affirming mood to its audience, which significantly increases the entertainment value of this turbulent adventure. In addition to the compelling cast and beautiful script, however, the camerawork and music are also worthy of mention. They create the perfect visual and sound carpet on which the exciting story can unfold very well. Even though the story doesn't exactly reinvent the wheel from a purely dramaturgical point of view and can definitely be considered conventional, the interplay of the various successful elements creates a very special impression that the film can also draw on in the long term.

Trash is unfortunately not necessarily the kind of film that appeals to a wide audience. That's a real shame, as Stephen Daldry has created a quite wonderful film on many levels that conveys a certain message without ever losing sight of its entertainment mission. Both lovers of more demanding arthouse films will get their money's worth, as well as those viewers who just want to enjoy entertaining cinema. A real insider tip, which has more than earned an absolutely worth seeing!

Cinema trailer for the movie "Trash (Großbritannien 2014)"
Loading the player ...