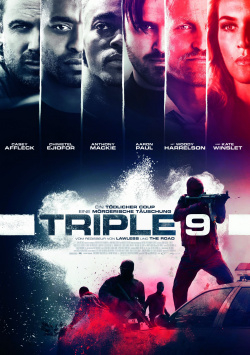 In some Atlanta neighborhoods, the rule of law no longer stands a chance. Rival gangs and the all-powerful Russian Mafia rule here. If you want to survive here, you have to adapt to the conditions dominated by crime, corruption and murder. For idealists, this is a deadly place. And so it's little wonder that a group of cops have banded together to rob banks for ruthless mob boss Irina Vlaslov (Kate Winslet). But money isn't enough for the powerful woman. And so she ramps up the pressure on the cops to steal something much more valuable, better guarded, from her. To pull off this risky heist successfully and unscathed, the entire Atlanta police force would have to be distracted. The only way to do that is to activate the code 999. But in order for that to happen, a police officer must die in the line of duty.

Director John Hillcoat has proven himself a master storyteller beyond the mainstream with the apocalyptic drama The Road and the excellent western Lawless. His productions are at times a little unwieldy, but always intriguing in a very special way. That's why his crime thriller Triple 9 was eagerly awaited by many - especially since Hillcoat was able to gather a first-class ensemble from cinema (Kate Winslet, Casey Affleck, Woody Harrelson, Anthony Mackie, Gal Gadot) and TV (Norman Reedus, Aaron Paul) in front of the camera. Anything other than a masterpiece really seemed out of the question. But that, unfortunately, is not what Hillcoat delivered.

No question, the film is very well crafted and has some quite strong moments of suspense and decent action sequences to offer. But in between, an arguably half-baked story with too many plot threads meanders along a bit too ponderously, without really being able to tie the viewer to the story and its characters. If you are absolutely captivated in the first few minutes, later on long-winded character moments and overloaded plot twists dominate the action. It almost seems like Hillcoat was trying too hard to avoid going into mainstream territory, which he unfortunately failed at in this case.

The acting is almost universally convincing, with some performers acting a little too over the top. However, this is ably offset by a customarily commanding Woody Harrelson, a really good Casey Affleck and a delightfully cold-hearted Kate Winslet. But even the excellent ensemble and the depressingly authentic atmosphere can't hide the fact that the story isn't told as excitingly as it could have been, given the really good initial situation. A rousing beginning and a brilliant showdown are simply not enough to make this the great thriller that is hidden somewhere here.

Those who like challenging crime thrillers and can overlook some distinct lengths will certainly appreciate the obvious qualities of Triple 9. But those hoping for consistent suspense and plenty of action will be bitterly disappointed here. Therefore: Despite many good ingredients only a rather bland soup and therefore also only with deductions worth seeing!