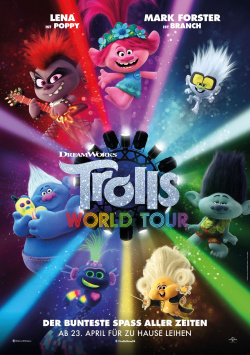 The world of the Trolls seems to be in perfect order. Poppy (voiced by Lena Meyer-Landrut) is queen and Branch (Market Forster) has found his place in the community. But then everything goes off the rails when Poppy and the others learn that there are other Trolls folk, all influenced by different styles of music: Funk, Country, Techno, Classical, Pop and Rock. Poppy is thrilled and is already dreaming of a big, colorful troll community. But Queen Barb, the queen of hard rock, has completely different plans: she wants to destroy all other kinds of music so that rock alone can take over. Poppy and Branch want to prevent that. They embark on a dangerous journey to the other troll races to unite the trolls in the fight against Barb. But that is easier said than done.

With Trolls came in 2016, the magic troll dolls, which were with their long colorful hair especially in the U.S. the rage, which have enjoyed especially in the 80s and also 90s but also great popularity in this country, successfully into the cinema. The colourful, constantly singing characters quickly won the hearts of children all over the world. And so a sequel was also quickly decided. The 90 million dollar Trolls World Tour was supposed to be released worldwide at the end of March - but the Corona pandemic put a spanner in the works. Still, the distributor didn't want to disappoint Trolls fans. And so, rather than simply postponing the theatrical release like so many other movies, the release was canceled and the film has gone straight to video-on-demand.

For families, this is a welcome change from the same old lockdown routine. And the rental fee of about 15 euros is much cheaper than a visit to the cinema, especially for parents with several children. Nevertheless, it's clear to see that the film was made for the big screen. Some of the brightly coloured images simply cannot unfold their full power on the screen - no matter how big it is. But aside from that, how does the sequel compare to the first film? Here one can say: Pleasingly well. Sure, some of the gags are still very flat. But every now and then, the humor is incredibly quirky and offbeat that you can't help but laugh heartily - even if it comes with the question of what the creators must have been smoking at that moment to come up with such ideas.

As in Part 1, the story is very, very simple-minded, but at least it tries to convey something of a message to children: No matter how different we may be, in the end there is more that unites us than divides us. We should all accept each other as we are. Of course, this is served with a colourful and glittering sledgehammer, but it's a lot of fun, not least because of the very diverse musical mixture this time. True, especially the songs work much better in the original English version, but the young target audience should be pretty indifferent.

Yes, it's a shame that we can not currently see movies in theaters. And visually strong works like Trolls World Tour in particular make it clear that even perfect home theater technology can't replace that special movie theater feeling. Nevertheless, this brightly colored sequel also works very well on the TV screen - and that's why I give it a very clear: Worth seeing!