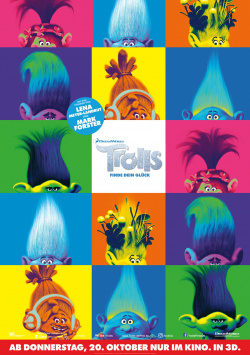 Since King Peppy saved his subjects from the ravenous Bergens, he, his daughter Poppy (voiced by Lena Meyer-Landrut) and the other Trolls have been living happily in Troll Village. There they party, sing and dance as often as they can. Only Branch (Mark Forster) doesn't feel like celebrating. He prefers to prepare for the next Bergen attack, which is as sure to come as the next troll party. After all, the giants live in the belief that they can only attain bliss by eating a troll. And indeed, with Prince Gristl desperate to eat his first troll, the outcast boss sets off in search of the troll village, hoping to regain her high position if she brings the trolls to the prince. After twenty years in exile, she's finally at the destination of her dreams - but she hasn't counted on the courage of the pugnacious Poppy, who, along with Branch, does everything she can to free the kidnapped trolls from the clutches of the hungry Bergens.

And once again, toys have made it to the big screen. With Trolls, the magic troll dolls, which were especially in the U.S. the rage with their long colorful hair, but which have enjoyed especially in the 80s and also 90s, but also in this country, great popularity, come to the cinema. The colorful, constantly singing characters, small children will certainly quickly close in their hearts. And there will certainly also be some adult troll fans who will have a lot of fun with this very colorful hustle and bustle. But that doesn't make this a good movie by any means. The story is a somewhat lovelessly cobbled together mix of The Smurfs and Cinderella with a dash of Shrek, the obligatory dance numbers are almost standard in modern animated films, and the humor breaks everything but new ground.

Although there are some thoroughly amusing moments, the film lacks any spark of independent charm or originality. You get the feeling that the film was staged according to a very clear building block system, where every single element must have already proven itself in many other animated films. Even though the squeaky-colorful fairy-tale world certainly exudes its own character in places, overall the film lacks any ideas of its own that would make it stand out from the crowd of 3D computer animated films.

Who doesn't want to see something fresh and unconsumed and who likes to go on an almost psychedelic troll trip might enjoy this musical fairy tale. The likability of the characters is certainly enough for that. But if you expect more than a mix of lukewarmly reheated ingredients, you'll be quickly annoyed not only by the vocals. Therefore: quite nice, but really only something for animation film fans who like it colorful, colorful and again colorful!