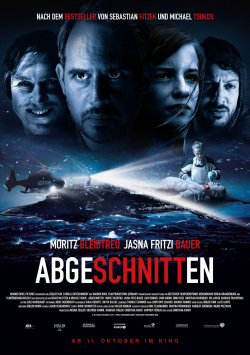 For forensic pathologist Paul Herzfeld (Moritz Bleibtreu) a real nightmare begins when he finds a small capsule in the head of a corpse during an autopsy. Hidden inside is a note with his daughter's cell phone number written on it. Soon it is a terrible certainty: Hannah has been kidnapped. Her tormentor sends Herzfeld clues that send him on a nerve-wracking chase against time. The trail also leads to Helgoland, which has been cut off from the outside world by a storm. It is only by chance that the young cartoonist Linda (Jasna Fritzi Bauer) and Ender (Fahri Yardim), the caretaker of the island clinic, become involved in the search for the kidnapped girl. And the two must truly go above and beyond to provide Herzfeld with the puzzle pieces that could help save his daughter's life - if it's not already too late for that.

With this film adaptation of the bestselling novel Abgeschnitten by Sebastian Fitzek and legal investigator Michael Tsokos, director Christian Alvart returns to the genre in which he once had his breakthrough with Antibodies. The dark psychological thriller sticks closely to the book template, also in terms of the depiction of the autopsy scenes. As a result, the film is not exactly for the faint-hearted. Even advocates of incontrovertible logic will have their problems with some aspects of the story. But if you are looking for atmospheric suspense cinema from Germany and are not deterred by some disgusting moments, you will definitely get your money's worth here - with minor restrictions.

Sure, it's a bit hard to swallow that a young female cartoonist performs an autopsy guided by telephone. But let's face it, the whole thing isn't a documentary after all, it's a thriller. It's a pity that the identity of the kidnapper is revealed too quickly, even though this gives Lars Eidinger the chance to deliver a strong performance in an extremely unpleasant way. Still, it might have been a bit more effective for building suspense to have this diabolical figure still operating in the dark at the beginning.

Yes, Cut Off has quite a few weak points. But as mentioned before, that doesn't change much that the movie is very exciting and atmospheric and has some well done surprises especially for viewers who are not familiar with the book. It's a pity that the finale is very rushed. Neither the (very predictable) build-up of tension nor the effects are convincing. Overall, however, there is clearly a deserved: Worth seeing!