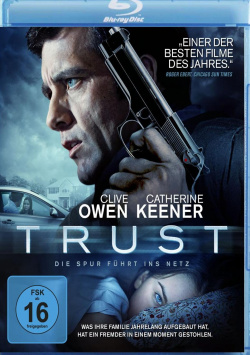 Trust - The Trail Leads to the Net - DVD

Movie: Actually, Will (Clive Owen) and Lynn (Catherine Keener) lead a carefree life with their children in a typical American suburb. Financially, the family stands neatly and also the relationship with the children is good. But the idyll is abruptly shattered when 14-year-old daughter Annie (Liana Liberato) makes the acquaintance of a boy over the Internet, whom she mistakes for a chat partner of the same age. But as online communication becomes more familiar, the stranger admits to being older than he has previously claimed. Although Annie is initially a little disappointed and her suspicions aroused, she agrees to a meeting. When the date reveals that her chat partner is not just an older student, but a grown man, Annie is shocked. Nevertheless, she allows herself to be persuaded to follow him to a hotel room. What transpires there permanently changes not only Annie's life, but that of her entire family.

With Trust, former Friends star David Schwimmer has finally proven himself as a director worth taking seriously. While his previous work for the US version of Little Britain, the Friends spin-off Joey or the Simon Pegg film Run, Fat Boy, Run was mainly in the comedic realm, Schwimmer delivers a tangible drama with Trust, which uses mainly restrained and quiet tones (even if the DVD cover suggests otherwise), but still has an enormous intensity. The unfortunately very topical subject of the dangers posed to children by the Internet is dealt with here without any striking moments or overly moralistic lectures. But it is precisely because of the rather restrained staging that the end result seems all the more harrowing and moving and does not let go of the viewer for a long time after the end.

The sensitive staging, which Schwimmer directs with a sure hand, is supported by great performances from the cast. In particular, Liana Liberato, 15 at the time of filming, manages to give the audience goosebumps on several occasions with her intense performance. And Clive Owen is also at his best as the desperate and completely helpless father. With Viola Davis, Catherine Keener and Chris Henry Coffey, there are also extremely strong supporting actors involved, making Trust an extremely strong film not only in terms of content, but also in terms of acting.

The fact that the whole thing doesn't end up drowning in sentimentality or coming across as overly doctrinaire must also be credited to Schwimmer. He does not set out to shock, nor to lecture with all his might. Rather, he wants to stimulate an important discussion, and that's exactly what the film does admirably. Sure, Trust is not light entertainment, but rather quite heavy fare at times. But it is an extremely good and important film that deserves more attention. Absolutely recommended!

Image + Sound: The image captures the atmosphere of this intense drama very well with its somewhat cool color scheme. Otherwise, the DVD is visually convincing with a very clean and pleasantly sharp image, which only has small weaknesses in dark scenes. The sound is overall rather decent mixed, although the dialogues, which dominate the tonal events, sound well understandable from the speakers. Good.

Extras: The DVD has just under 40 minutes of additional material to offer. It starts with a Making of (approx. 16 min.), which has a clear promo character, but still knows how to convey some good information. The same goes for the interviews (approx. 13 min.), while the look behind the scenes (approx. 3 min.) consists of little meaningful, uncommented footage from the shooting. The outtakes (approx. 8 mins) are not, as one might think, funny bloopers from the shoot, but short cut scenes that are worth watching, but would have stalled the dramatic flow of the story somewhat.

There's also the trailer for the film and programming tips from the provider. For a smaller production like this, a decent bonus package overall!

Conclusion: Trust is a very intense drama that scores points with strong actors and pleasantly unplacid direction. David Schwimmer has given a gripping take on a volatile subject, while cleverly avoiding crossing some dramaturgical boundaries. With good actors and a moving finale, Trust is certainly one of the insider tips of the 2011 home cinema winter. Absolutely recommended!