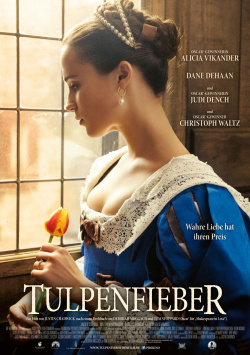 For a long time, Sophia (Alicia Vikander) has lived as an orphan in a convent. But now she calls the stately mansion of spice merchant Cornelis Sandvoort (Christoph Waltz) in Amsterdam home. Marrying the older man was not a union for love. For Sophia, it was the only path to a better life, and for Cornelis, the opportunity to fulfill his desire for an heir. But so far, pregnancy has not worked out. When Cornelis commissions young painter Jan van Loos (Dane DeHaan) to paint a portrait of him and his wife, Sophie quickly falls in love with the charismatic artist. The two begin a passionate affair that does not go undetected by Sophia's maid Maria (Holliday Grainger). When pregnancy threatens to get her fired, Sophie is presented with a choice: if she doesn't want Maria to tell Cornelis about the affair, she'll have to embark on a risky plan - one that could blow up at any moment.

For the film adaptation of Deborah Moggach's novel Tulip Fever, director Justin Chadwick had at his disposal a screenplay written by none other than Oscar winner and acclaimed playwright Tom Stoppard (Shakespeare in Love). Stoppard's very special talent for blending wry humor and moving drama comes through again here. There are some quite wonderful moments that thrive on clever wordplay, followed by genuinely moving scenes full of romance and emotion. Unfortunately, Chadwick isn't quite as virtuosic a filmmaker as Stoppard is as a writer, so there are some slightly long-winded moments now and then. But these are made up for by the fascinating set design as well as the superb ensemble cast.

When, for instance, Sophie hurries through Amsterdam on her way to meet Jan, along the canals where merchants advertise their wares and prostitutes are on the lookout for the next suitor, you can see from the many small details how much effort has gone into bringing 17th century Amsterdam back to life. This creates a very special atmosphere in which even very conventional plot elements or overdrawn characters work surprisingly well. The two love stories at the heart of Tulip Fever - the one between Sophie and Jan, and the one between Maria and the fishmonger Willem - are perfectly interwoven. They are sensitively, but not too cheesily, realised, which is why you feel for the protagonists here as an audience member.

Justin Chadwick has directed a truly beautiful historical drama that, while not perfect, is never dominated by overly dominant weaknesses. If you like great romantic dramas and generally love great equipped emotional cinema, you shouldn't miss this novel adaptation. Worth seeing