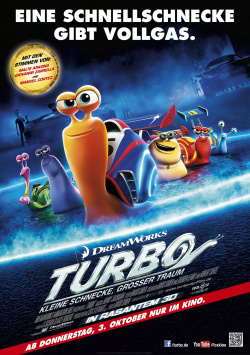 Day after day, Turbo, a little snail, must do the same monotonous work in a tomato patch. Although Turbo knows that the survival of the snail community to which he and his brother Chet belong depends on the tomatoes. Still, he would much rather be anywhere else. For Turbo dreams of being a real racing snail and, as such, one day competing in the legendary Indianapolis 500 race. But of course that's just a pipe dream, even though Turbo can cover 90 centimetres in a breathtakingly fast 17 minutes. When the snail is blown onto the hood of a sports car one night during a trip to a freeway overpass and sucked into the vent, the unbelievable happens: The nitrogen oxide from the engine alters Turbo's molecular structure, turning the slow creeper into a lightning-fast racing snail. His newfound strength comes in handy the next day when Chet is abducted by birds, which the nimble Turbo chases across the city. Here Turbo's speed proves to be more than just a lifesaver for Chet. For when the snail brothers fall into the hands of snack bar owner Tito, who discovers Turbo's talent, he gets closer and closer to his goal of becoming a big racing star.

Turbo - Little Snail, Big Dream is a nice animated film that has some neat ideas and lovable characters to offer. But despite some good laughs and a few endearing ideas, the snail version of Fast & Furious lacks the real kick to make it stand out from the crowd of animated films. The goings-on in the tomato patch are full of neat ideas and even suggest some surprisingly biting humor here and there. And the racing snail troupe that Turbo meets at Tito's are also very funny and originally implemented, especially for younger viewers. Anyway, especially smaller viewers should be absolutely thrilled by the snail speedster and his friends, because especially the racing scenes are staged in 3D in such a rousing way that you like to cheer along with Turbo.

The humor is overall kept rather appropriate for children, although there are now and then a few nice gags, which can amuse especially adult viewers. But overall, things are rather harmless here, though this also applies to the story itself. There are no real surprises or characters that really stand out like the penguins from Madagascar, the Minions from I - Simply Incorrigible or rodent Scrat from the Ice Age movies. Without any real climaxes, the whole thing plods along until the end, which is filled with excessive pathos. What remains is the feeling of having been well entertained. But Turbo and his friends can not leave a lasting impression.

Turbo - Little snail, big dream has the heart in the right place, that is without question. The animated adventure is full of good approaches and can also fully convince on a visual level. Therefore, a clear recommendation can be made for little animated film fans from the age of 6, as the film really is a lot of fun for children. However, if you expect more from a 3D animated film than 90 minutes of harmless popcorn entertainment, if you're hoping for iconic characters and big laughs, you'll be disappointed when you leave the cinema. Therefore: as a children's film absolutely worth seeing, as an animated film pleasure for the whole family only with cutbacks still to recommend!