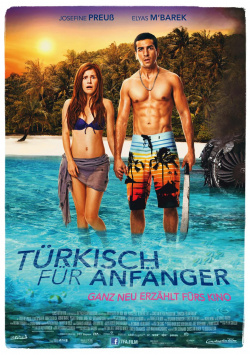 With Turkish for Beginners, Bora Dagtekin created an original as well as funny comedy series in 2006, which was probably a more important contribution to integration than any sophisticated drama could have succeeded with its politically incorrect humor and its focus on entertainment value. After three seasons, however, Funny was over. But even though fans had to say goodbye to Lena, Cem and the other beloved characters on screen, there is now a reunion on the big screen. Not in the form of a sequel, though. In the cinema, the story of the first meeting of the Schneider and Öztürk families will simply be retold. In keeping with the US model, the cinema version is to be a reboot that will see the familiar characters meet in a completely new situation.

Really Lena (Josefine Preuß) does not want to fly with her mother Doris (Anna Stieblich) on vacation to Southeast Asia. But when the Turkish head macho Cem (Elyas M`Barek) of all people sits next to her on the plane, Lena is sure that things can`t get any worse. Far from it: due to a storm the plane has to ditch and while most of the passengers can be brought to safety, Lena ends up on a deserted island with Cem, his strictly religious sister Yagmur (Pegah Ferydoni) and the stuttering Greek Costa (Arnel Taci). And while cultures clash on the deserted beach and a battle of the sexes is fought, Lena's anti-authoritarian mother and Cem's father Metin (Adnan Maral), who lives according to bourgeois values, become closer. This can only end in disaster...

That there is a reunion with Turkish for Beginners is first and foremost a beautiful thing, which is especially evident in the moments when the clever, politically incorrect humor of the series is felt. Also, the idea of offering something completely new to old fans while allowing new viewers to enjoy this comedy should be seen as a positive. Nevertheless, it must unfortunately be said that some aspects do not work particularly well, especially in comparison to the series, and have lost much of their charm and persuasiveness.

First and foremost, this applies to the relationship between Lena and Cem. The series took almost the entire first season to do this, until there was a first romantic approach between the two. Lena has slowly been able to discover that behind Cem's rough macho exterior is a genuinely likeable core, and Cem has also had enough time to see behind Lena's chaotic facade and fall in love with the girl. Here, though, it seems that the sight of Cem's naked body is enough to completely shake Lena's worldview - and that just seems a little too shallow.

Also, the characters as a whole seem much more overdrawn than they did in the series, which is especially noticeable in a negative way with Doris and Metin. True, they were already extremes in some ways in the series, but they always remained believable and somehow realistic. In the movie version, on the other hand, they almost seem like caricatures, which not only hurts their credibility, but also their sympathy value. In any case, the script seems to rely a lot more on claptrap than on the biting, clever humor that distinguished the series, especially in the first season. That it can be done differently is proven by a scene in which Lena has a very special dream about herself and Cem. This dream sequence is simply brilliant and if the film would move more on this level, then the quality of the series would be reached easily.

Sure, Turkish for Beginners is also fun in the cinema - but just on a different level than on TV. Many possibilities remain unused, some gags are shockingly flat and the characters are nowhere near as endearingly drawn as they were in the series. In this respect the movie is already a disappointment. As a simple comedy, however, the whole thing works quite well and will certainly find its audience. So the bottom line is: it's nice that the makers wanted to offer the audience something new, but the fact that the best aspects of the series were abandoned for this is not really an advantage for the cinema version of the award-winning series. Those expecting the irreverence, cleverness and warmth of the series will likely leave the cinema disappointed. However, those who simply want to see some harmless cinema fun with a good-humoured cast, beautiful locations and some good gags will definitely be entertained.

Cinema trailer for the movie "Turkish for Beginners (Deutschland 2012)"
Loading the player ...