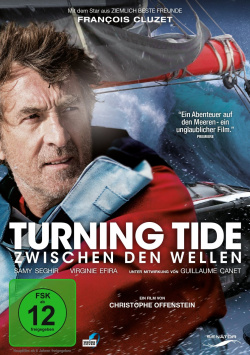 Turning Tide - Between the Waves - DVD

Film: When his best friend Franck Drevil (Guillaume Canet) is unable to take part in the legendary Vendée Globe single-handed regatta after an accident, Yann Kermadecs (François Cluzet) spontaneously fulfills a big dream and steps in for Franck. Only three days after the starting signal Yann is in second place and his first race around the world could end in a big triumph. But after a few days Yann notices that he has an uninvited guest on board. The 16 year old refugee Mano (Samy Seghir) from Mauritania has sneaked onto the boat. A clear violation of the rules that could immediately disqualify Yann. To keep his chance of victory, he conceals Mano's presence and searches for the right opportunity to send his stowaway passenger off board again. But when he has to hurry to the rescue of a capsized competitor and fetch the casualty onto his boat, the whole thing threatens to fly open...

"Turning Tide" is a moving, life-affirming drama in front of a fascinating natural backdrop, which deals in a stirring way with the unfortunately very current refugee topic. Director Christophe Offenstein doesn't stay long with an introduction, but dives directly into the dramatic racing action. At first it seems as if it all comes down to a French version of the Robert Redford drama "All is Lost". But it soon becomes clear that the focus here is not on the struggle of a single man against the mighty power of the sea. On the contrary, Offenstein poses a question of conscience to his main character that the viewer can also intensively deal with.

The craftsmanship of the film is beyond all doubt. The camera has captured some really fascinating, beautiful pictures, which make the vastness of the sea and the strains of the regatta very noticeable. The two main actors deliver very strong representations, by which both the Yann polarized on the will to win and the desperate refugee boy Mano become real sympathizers. This is extremely important for the movie's success, as the story is almost always carried by these two characters.

Despite all these positive aspects, the film is ultimately not completely convincing. For the humanitarian message of history is sometimes somewhat thick and takes on almost fairytale-like characteristics towards the end. At its core, it is absolutely right and important. But the resolution is a bit too smooth to be really believable. Moreover, the finale seems a bit rushed, which fits stylistically to the beginning of the movie, but gives the nice story a too superficial ending.

Although the great enthusiasm may be limited by these weak points, a positive overall impression prevails overall. Because the images, the actors and also the core of the story are strong enough to dominate the negative aspects in the end. And that's why all friends of European feel-good cinema are only slightly clouded by one thing: worth seeing!

Picture + sound: The picture on the DVD is particularly convincing in scenes where the vastness of the sea is to be made perceptible, with a pleasant picture depth. The overall sharpness is consistently at a very high level and the positive overall impression also predominates when it comes to colouring and contrast adjustment. The Dolby Digital 5.1 mix lives in many moments from the sounds of the sea, to which music and dialogue have been harmoniously matched. Good.

Extras: In addition to the trailer, the DVD also has a short but worth seeing Making of (approx. 17:34 min.) on offer, which offers a neat and interesting insight into the production. Good.

Fazit: Even though the humanitarian message of "Turning Tide - Between the Waves" is a bit too thick in some places and thus almost seems like a fairy tale, director Christophe Offenstein has staged a very beautiful and stirring deep-sea drama, which can please with great pictures, strong actors and a story that couldn't be more topical. The DVD presents the French hit movie in good picture and sound quality, a worth seeing Making of also offers insights into the making of the film. Altogether this is enough for a satisfied one: Recommendable!