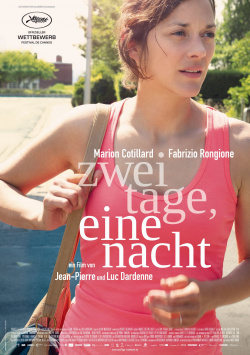 Just when unstable Sandra (Marion Cotillard) is about to get her life back on track, she receives bad news: as part of cost-cutting measures, her job is to be rationalised away. In order to calm the employees' tempers, they are to receive a one-off bonus payment in return. Only if the staff vote unanimously against the money could Sandra keep her job. After the vote has been negatively influenced by misinformation, Sandra manages with the help of a colleague to persuade her boss to schedule a second vote. She now has 48 hours to convince her colleagues to forego the bonus payment. She has two days and one night to fight for solidarity in a climate of economic uncertainty, growing poverty and unemployment.

Two Days, One Night is the latest directorial effort from the Dardenne brothers, Jean-Pierre and Luc. As with their last film, The Boy on the Bicycle, they again rely on a very authentic, almost documentary-like staging for this drama, which dispenses with common cinematic stylistic devices such as music or a clearly structured dramaturgy. Instead, the viewer is thrown directly into the story and is also left hanging in the air to a certain extent at the end. While this comes across as unadulterated and realistic, it is also rather difficult to access for a broad audience.

With the help of a small story, major social problems are dealt with here. The global financial crisis, the insecure job market or the feeling of lacking solidarity in difficult times are unfortunately all issues that not only Sandra has to face, but also many viewers can relate to. Due to Marion Cotillard's very good acting alone, one is definitely carried away by the seemingly hopeless fight of a desperate woman for her job - provided that there is a soft spot for movies in which reality is depicted as authentically as possible. But since cinema is still a way for most viewers to escape reality, the question must be allowed why one should spend money to watch a woman go from door to door only to be confronted again and again with a lack of perspective, fear, selfishness or mendacity.

Two Days, One Night is not an entertainment film, not a story that really inspires hope or that leaves a lasting impression. Rather, the director brothers have created a genuinely frustrating portrayal in places of a society driven by fears for the future to the point where everyone is next to themselves. Sure, there are also small moments that give us hope, that show that there is a will for solidarity in many people. But all in all the film leaves a sobering and depressing impression. It's hard to recommend anyone to spend money on it. If you like socially critical art house cinema that is characterized by good acting and an authentic production, this drama can definitely be recommended to you. But if you need something similar to entertainment for a successful, relaxed evening at the movies, you won't get much out of this work. Therefore: Only with reservation worth seeing!

Cinema trailer for the movie "Two Days, One Night (Belgien/Italien/Frankreich 2014)"
Loading the player ...