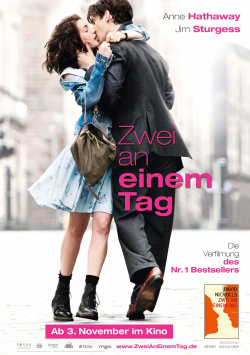 Two in a Day

July 15, 1988 is the day Emma Morley (Anne Hathaway) and Dexter Mayhew's (Jim Sturgess) lives will change forever. For what begins as a one night stand on the day of their exam party develops into a real friendship between two inherently very different people. For twenty years they meet again and again, come closer or move away from each other. Personal and professional lows and highs and long distances can't prevent their lives from crossing again and again. But even though they seem destined for each other, they can never really find each other.

With this film adaptation of David Nicholls' bestselling novel Two in a Day, director Lone Scherfig (Wilbur Wants to Kill Himself, An Education) has once again demonstrated a talent for sensitive emotional cinema. True, it's not quite as cliché-free as the Dane's previous films. But in the end, the bestseller adaptation has become a refreshing and endearingly original romance, not least due to the good script, which David Nicholls wrote himself. In the process, the film manages to convince on several levels at once.

There are the actors, of course. Between Anne Hathaway and Jim Sturgess (Across the Universe) it tingles enormously. The two of them know how to make their characters develop over twenty years in a very short time and still look believable. Aided by good makeup, costumes, and sets, Hathaway and Sturgess deliver enjoyably versatile performances both together and separately, making the evolution their characters go through over the course of two decades feel realistic and relatable to many viewers.

However, the adaptation of the novel is also convincing. Of course, twenty years cannot be covered in detail in a film of under two hours running time. Instead, the film version of the story focuses on some of the most important moments in Emma and Dexter's lives, while the remaining years are covered more in passing. Still, as a viewer, you don't get the feeling that Scherfig's production is rushing through the years. At key moments, she takes her time to develop the characters and their story. So in the end you're left with the feeling that you've really followed these characters for a long time, they've grown on you and somehow seem familiar. And this is exactly where the crucial strength of the film lies. Because even if Dexter and Emma don't always show their cheerful or even nice side, in the end there is nothing for the viewer to wish for them more than that they finally find each other and become happy together.

With good and pleasantly restrained use of music, fashion and other important features for the time in which the story takes place in each case, Lone Scherfig has succeeded in creating a charming journey through twenty years in which she not only tells a wonderful romance, but also traces the very normal ups and downs of every life. Even if some of the secondary characters come a little too short and some plot lines could have deserved a little more time, Two in a Day has become an absolute must-see for all hopeless romantics and for all those who want to see a really nice love movie again, which moves here and there off the beaten path of the genre. Absolutely worth seeing