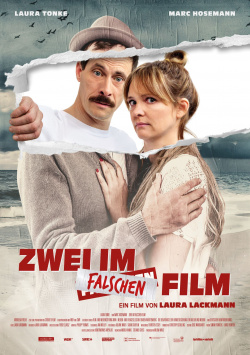 Two in the wrong movie

For years they have been a couple and a well-rehearsed team. But the mere fact that Hans (Marc Hosemann) now only calls his girlfriend Heinz (Laura Tonke) shows that romance has long since followed. Everyday life has smothered any fire. Hans works in a copy shop while actress Heinz keeps her head above water with dubbing work for a cartoon traffic light. While he seems content with this situation, Heinz finally wants more. And so the two make a list of all the things that go into a real love like in the movies - but unfortunately, real life plays out very differently than it does in the movies.

Two in the Wrong Movie starts where most romantic comedies stop: at the end credits of such a cinema romance. It begins not only an amusing conversation about clichés and conventions of this genre, but also an entertaining variation of those very same. Director Laura Lackmann (Mängelexemplar) uses the common clichés to have a couple trapped in the daily grind question their relationship, but also their lives themselves. It's filled with delightful dialogue, quirky snapshots and some genuinely funny scenes. But Two in the Wrong Movie is far more than simply a light comedy.

Because there are definitely aspects that may be comically packaged, but are also treated with the necessary seriousness. This is necessary to make clear, for example, how unhappy Heinz is with her life and how difficult it is for her to feel loved by a man who calls her Heinz. On this level, Two in the Wrong Movie not only makes you laugh, but also makes you reflect on your own life.

The film is carried by two great actors. The chemistry between Marc Hosemann and Laura Tonke is perfect. They seem familiar and yet you can also feel a certain distance that pushes itself more and more between them. How Laura Lackmann builds this up and ultimately resolves it is another strength of the film. A surprising, original and refreshingly unconventional relationship comedy. Absolutely worth seeing

Cinema trailer for the movie "Two in the wrong movie (Deutschland 2017)"
Loading the player ...