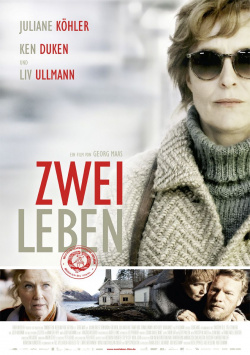 After spending her childhood deported by the Nazis to a children's home in Germany, Katrine (Juliane Köhler), daughter of a Norwegian (Liv Ullmann) and a German soldier, has been living a happy life in Norway for many years now. Here she has built a seemingly perfect existence with her husband Bjarte (Sven Nordin), her daughter Anne (Julia Bache-Wiig) and her mother &Aring;se. But with the fall of the Berlin Wall and the resulting reorganization of Europe, Katrine is caught up with her past. For young German lawyer Sven Solbach (Ken Duken) is seeking a case at the European Court of Justice that will bring reparations and thus some justice to children abducted by Nazis. But Katrine refuses his request that she and her mother testify as witnesses. Nevertheless, when Solbach persists and comes across some inconsistencies in Katrine's past, she begins a desperate struggle to preserve a secret, the revelation of which could destroy her private happiness forever.

For the drama Two Lives, director Georg Maas (Newfoundland) and his team conducted intensive research into one of the many dark chapters in the history of the Nazi regime. During the German occupation of Norway between 1940 and 1945, many German soldiers entered into relationships with Norwegian women, resulting in numerous children. In order to promote the Germanic heritage for Germanness, the Nazis established children's homes, to which about 250 of these German-Norwegian children were deported. Most of them ended up in what later became East Germany, where two decades later the government took advantage of this Nazi legacy to place Stasi agents in the West. In exchange, they were given the identity of German-Norwegian orphans. To this day, not all of these agents have reportedly been unmasked.

Based on this background, Georg Maas has crafted an intense drama about guilt and atonement, about the difficult question of perpetrator and victim, and about one woman's struggle not to let the shadows of the past destroy her happiness. Maas has chosen a very atmospheric visual realisation for the interlaced narrative form, in which the truth is slowly pieced together through flashbacks. While the scenes set in the present are often filled with images of raw beauty, the flashbacks to Katrine's past are presented in the style of old Super 8 footage. Coarse-grained, somewhat blurred and marked by an oppressive underlying mood, this view of Katrine's second life presents itself, revealing deeper abysses with each additional piece of the puzzle.

As convincing as the actors are, Two Lives works primarily because of its cleverly constructed dramaturgy, which culminates in an ending that is as intense as it is consistent. Georg Maas and his team, both in front of and behind the camera, have succeeded in creating an exciting drama, the background to which one would like to learn much more about after watching this film. A good example for the fact that demanding program cinema fare can also be really entertaining. And for this there is an absolutely deserved: Worth seeing!