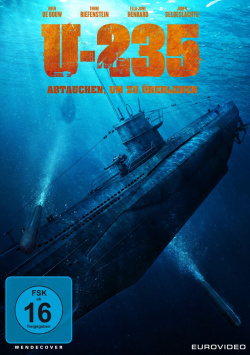 Film: When it becomes known that Hitler has commissioned the construction of a new weapon of mass destruction, the Allies are determined to stay one step ahead of the Germans. For this reason, a small group of resistance fighters is to transport a large load of uranium from the Congo to the USA in a captured Nazi submarine. A veritable suicide commando, which is to be led to success with the support of a captured German submarine commander. But it does not take long before they are discovered and mercilessly hunted down. And now the completely inexperienced troop must dive into the depths of the ocean to have even a hint of a chance to survive this impossible mission.

With "U-235 - Dive to Survive" Sven Huybrechts has made a convincing directorial debut. It is one of the most expensive productions in Belgian cinema history, for which an entire submarine was even recreated. However, the attention to detail is only one of the reasons why the film works. Especially at the beginning Huybrechts uses a rather black-humorous tone, obviously inspired by Tarantino's "Inglourious Basterds". The war movie based on true events can't reach its class, but it can build up a very high entertainment value.

In the course of the story the whole thing changes more and more into a solid submarine thriller with successful suspense moments, which can convince with its claustrophobic atmosphere and purposefully used action elements. However, this doesn't apply to all aspects of the story. In flashbacks, for example, "Das Boot" star Martin Semmelrogge can be seen in a role that was clearly inspired by the character that won Christoph Waltz an Oscar in Tarantino's film. As good as Semmelrogge may have been in Wolfgang Petersen's submarine classic, here he is rather miscast and seems strangely out of place given the cruelty of his character.

However, it must also be said that the scenes in which Semmelrogge appears are nevertheless very intense and important for the plot. They also contribute to the fact that "U-235 - Dive to Survive" is overall thrilling and entertaining, despite some small flaws. Who likes submarine thrillers in the style of "U-571" and black-humorous war movies should definitely take a look here. Worth seeing!

picture + sound: The picture of the DVD convinces with a good sharpness of detail, which also in the many darker sequences only loses slightly in quality. A positive overall impression is also predominant in terms of colour and contrast. The Dolby Digital 5.1 mix brings out the atmospheric sound backdrop inside the submarine very well, but at the same time also transports the dialogues powerfully out of the boxes. Good!

Extras: Unfortunately there is no bonus material on the DVD.

Conclusion: "U-235 - Dive to Survive" is a mixture of claustrophobic submarine thriller and black humorous war movie. It doesn't always work, but overall it offers a pleasantly high entertainment and suspense value. The DVD presents the Belgian production in good picture and sound quality, bonus material is unfortunately looked for in vain. Overall a clear case of: Recommendable!

The film is now also available as VoD!