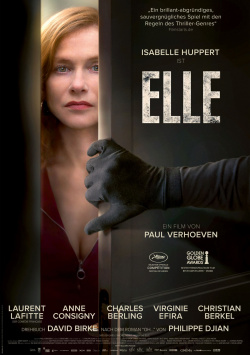 Mich&egrave;le (Isabelle Huppert) has both feet firmly planted in life. She is the head of a successful video game development company, which she runs with occasionally undercooked precision. Mich&egrave;le knows what she wants, and she gets it her way, whether she makes enemies or not. But when she is attacked and raped in her home one day, her life is thrown completely out of whack. On the outside, she is almost frighteningly indifferent to what has happened. But on the inside, she is driven by a desire for revenge. When she tracks down her attacker, she begins a dangerous game that threatens to spiral out of control at any moment.

Elle is not the film you might expect to see in a story about rape and revenge. Paul Verhoeven, known for his biting, enigmatic humour, has directed a vicious thriller that surprises by repeatedly employing jet-black, and at times very subtle, humour, freeing both perpetrator and victim from any moralising. The result is disturbingly amusing, completely inappropriate and 100% politically incorrect. The great feat here is that Verhoeven doesn't let the story degenerate into farce and its characters into completely overdrawn characters. Rather, he manages to make Mich&egrave;le in particular and every single step of her actions seem believable.

As is so often the case, Verhoeven once again lets the greatest maleficies rain down on the viewer almost incidentally - always when you are so not expecting it. In short sentences the characters you thought you had figured out suddenly appear in a whole new light. This concerns one character in particular - who exactly, of course, will not be revealed here. Only this much: How Verhoeven opens an unbelievably deep abyss around this until then completely differently portrayed person by one sentence, is simply terrific.

Elle is magnificently directed, but also superbly acted, especially by Isabelle Huppert, who quite rightly won a Golden Globe for her role. The film is not for the morally squeamish and certainly not for people who are rather sexually uptight. But if you want to look into the abysses of the human soul in a surprising and wonderfully evil way, you should definitely not miss this masterful thriller. Absolutely worth seeing

Cinema trailer for the movie "Elle (Frankreich/Deutschland 2016)"
Loading the player ...