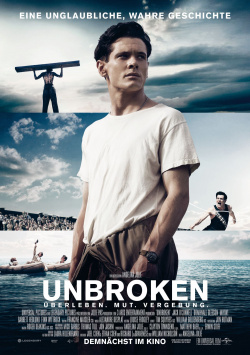 When Louie Zamperini (Jack O`Connell) competed as a runner for the U.S. in the 1936 Berlin Olympics at the age of only 19, his life seemed to have finally arrived on the home stretch to success. For too long, it had looked like the son of Italian immigrants would go off the rails. His talent in running opened up a whole new set of opportunities and new dreams. But like many other young men, he had to put those on hold for the time being with the outbreak of World War II. As an Army Air Corps bombardier, he fought for his country over the Pacific. But when his plane crashed over the South Pacific during a rescue mission, Louie and his two surviving chambermates began a long road of suffering. For a full 47 days they floated in a lifeboat on the ocean - 47 days that only two of them survived alive. But when they were picked up by the Japanese navy, it was only the beginning of a nightmare that would continue for two long years.

With Unbroken, Angelina Jolie ventures into some extremely difficult material as a director. The story of Louis Zamperini is fascinating, terrifying, inspiring and stirring. To do justice to all of this in just over two hours is a challenge that Jolie masters very well in places. The first twenty minutes in particular promise to be a gripping war drama that also works very well as a biography of an extraordinary athlete thanks to the well-used flashbacks. Carried by absolutely convincing actors and impressive images, the viewer is very quickly captivated, even if especially the dialogue and the drawing of the supporting characters is arguably conventional.

Quickly it becomes apparent that of all things the screenplay by Oscar winner Joel & Ethan Coen is the film's weakest point. After the successful opening, the action simply lingers too long on the high seas and then in the Japanese prison camp. Although superbly acted and engagingly directed, for over 90 minutes the viewer is offered nothing more than watching a human being suffer unspeakably. Sure, the title of the film says that the central point is to show that all this suffering couldn't break Zamperini's spirit. But the script sinks into a monotony here that takes away much of the power of this message. For instance, if the script had elaborated more on the mind games General Watanabe used to break Zamperini, and if, for instance, the far-too-long scene in the lifeboat had been punctuated by some flashbacks, the end result might have been a bit more powerful than it ultimately is.

So it's just hard to recommend spending money to watch other people suffer for two hours. That's not to say that Unbroken is a bad movie. It simply has too many strong scenes and craft strengths to offer for that. Also, Angelina Jolie proves to be a really good director for long stretches. But both the screenplay and the resulting production dwell too long on the tale of woe. Even if a movie like this isn't supposed to provide entertainment in the light, superficial sense, it doesn't necessarily have to be completely dispensed with in order to tell such a dramatic story. War movie classics like Broken Chains have proven that it's absolutely possible to entertain viewers while also offering depth. Jolie missed that opportunity, which is why Unbroken ultimately falls short of its potential. However, for those who find the actors and the story itself strong enough to overlook the plodding moments, this cinematic memorial to Louie Zamperini, who passed away in July 2014, can be warmly recommended. Worth Seeing