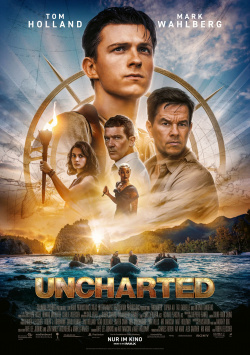 Since childhood, Nathan Drake (Tom Holland) has been fascinated by treasure hunting. However, since the disappearance of his older brother, he only uses his talents for small-time racketeering. Experienced treasure hunter Victor "Sully" Sullivan (Mark Wahlberg) wants to change that: He hires the young man to recover the legendary gold once amassed by Ferdinand Magellan and lost 500 years ago by the House of Moncada. It is the very treasure for which Nathan's brother has also been searching for many years. After initial doubts, Nathan agrees to work with Sully and a hunt begins around the globe, where the two not only have to solve dangerous riddles, but also have to watch out for the henchmen of Moncada (Antonio Banderas). Because he is convinced that his family are the rightful heirs of the treasure - and to claim this inheritance, Moncada goes literally over dead bodies...

"Uncharted" is the long-awaited film adaptation of the popular video game series around the treasure hunter Nathan Drake. Directed by Ruben Fleischer ("Zombieland", "Venom"), Tom "Spider-Man" Holland takes on the role of the popular adventurer. Attempts have long been made to bring a film adaptation of the games to the big screen. After numerous failed attempts, it has now been possible to stage a quasi-prequel to the games, with the film making use of numerous scenes from the previously released games. The aim is to satisfy fans of the games and lure them into the cinema. As a complete newcomer to the "Uncharted" universe, however, I can say that the film works as light entertainment fare even if you don't know the games.

It's easy-to-digest popcorn cinema here. Tom Holland does a fine job as the action hero, even without his Spidy suit. And the chemistry between him and a somewhat woodenly acting Mark Wahlberg is also coherent. The verbal sparring between Drake and Sully undoubtedly provides the most amusing moments of the film, which, in addition to its entertainment value, also has to contend with a number of problems. The biggest of these problems is, of course, the script, which doesn't take any time to flesh out the characters or develop the story. Thus, the characters hop from one location to the next, find the individual clues without much trouble, and still have to prove themselves in a few action sequences. This is quite entertaining, but never even begins to have the fascinating effect that other great adventure films like "Indiana Jones" or even the much weaker "National Treasure" films with Nicholas Cage were able to unfold through their much better staging.

Another problem are the effects. Too often CGI is very obviously used here. You can just see in one sequence that Nathan Drake is a computer generated Tom Holland. This makes the whole thing look like a video game in places, even on the big screen. This may not bother the intended target audience, but these action sequences simply can't evoke real enthusiasm due to the obvious artificial computer look. The bottom line is that the adaptation of "Uncharted" has done some things right, but still - as is often the case with adaptations of videogames - a lot of things are left wanting. No masterpiece, but also no complete failure and therefore also: (With cutbacks) worth seeing!

Cinema trailer for the movie "Uncharted (USA 2021)"
Loading the player ...