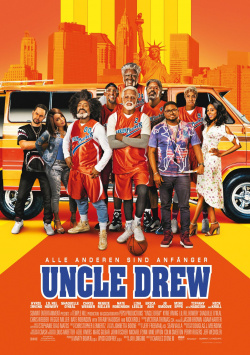 Dax (Lil Rel Howery) has to come to terms with the fact that he himself will never be a big shot in basketball. He's way too short, too overweight, and too nearsighted for that. As a coach, however, he wants to finally show his eternal rival Mookie (Nick Kroll) what he's got. It's just too bad that Mookie steals his top player, without whom Dax's team doesn't stand a chance. But then he meets old Uncle Drew (Kyrie Irving), who is the subject of many legends. Dax is able to persuade this myth to return to the pitch once more - but Uncle Drew has one condition: He'll only play with his old team. Whether these spry retirees can take on Mookie's young talents seems questionable, though.

The US public first came into contact with Uncle Drew in 2012, when the aging basketball player became the central figure of a Pepsi advertising campaign. Four short videos became an absolute hit on youTube, which is why the decision was quickly made to turn the internet hit into a cinema success. As in the commercials, NBA star Kyrie Irving was to be transformed into old Uncle Drew with a lot of prosthetic make-up - as were other big basketball stars like Shaquille O`Neal, Chris Webber and Reggie Miller. As spry ball wizards, they were to be sent on a lengthy journey, at the end of which - how could it be otherwise - there was to be an important tournament in which the pensioners were to show the arrogant youth of today once again where the frog has the curls.

In itself quite a nice, if not exactly original idea. But unfortunately the realization is only partly successful. On the one hand this is due to the fact that neither the old man make-up, nor the acting performances of the sports stars can really convince. Nick Kroll plays the arrogant creep way too over the top. And whoever decided that Tiffany Haddish should be funny, so that she now gets to showcase her shrill, annoying style of acting in every US comedy felt, belongs out of Hollywood forever.

Lil Rel Howery (Get out) does a decent job of acting, but it doesn't make up for it. Uncle Drew simply lacks charm, wit and convincing dramaturgy in too many places to offer anything more than extremely shallow average entertainment. It's quite nice here and there, but can't leave any impression at all, so that you've already forgotten about the movie while the credits are still rolling. For this there is only one: Worth seeing with clear restrictions!