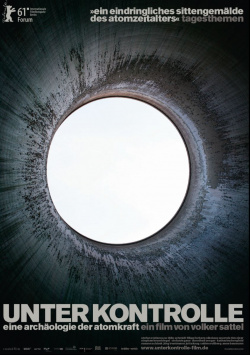 The documentary film Under Control could not have been released at a better time. Yet filmmaker Volker Sattel had been concerned with the safety of our nuclear power plants long before the nuclear debate triggered by the Fukushima disaster. And this is precisely the great strength of the documentary. Completely uninfluenced by the events in Japan, Sattel visited active and decommissioned nuclear power plants, interim and final storage facilities, spoke with those responsible and employees, but also with critics. However, he uses the interviews only very sparsely, rather letting the images speak, which are fascinating, but also of a certain menace.

The viewer has to get used to the pace of the documentary, however. Especially in the first 30 minutes, Sattel presents almost only uncommented images. This could come across as plodding or even boring to many viewers. Especially in view of the fact that the whole nuclear discussion is currently being conducted in a very loud and heated manner, the calm and quiet production doesn't seem at all appropriate. But on closer inspection, the opposite is actually the case. Unter Kontrolle does not use a lot of emotion, but presents sober, objective images that say more than statistics or panic speeches. It can be assumed that only very few people who speak out against nuclear power really know what goes on in such a nuclear power plant, what the safety systems look like and how the operators try to protect themselves against possible horror scenarios.

Unter Kontrolle is certainly not a promotional film for nuclear power plants. However, the documentary refrains from overly one-sided statements and offers the viewer the rare opportunity to take a very revealing look behind the scenes for once, which may confirm some fears, but puts others somewhat into perspective. Yet, as already mentioned, the film lives primarily from its images. And they are far from all scary. Admittedly, the tracking shot through a nuclear waste repository has something very depressing about it. But when Sattel shows how, for example, a nuclear reactor has been transformed into an amusement park or how a reactor that has never been connected to the grid is used as a training facility, then this also repeatedly provides a certain fascination that is hard to resist.

Overall, Under Control is perhaps a somewhat unwieldy, but very good and important contribution to the almost purely emotional nuclear debate. Although the nuclear phase-out is the only logical consequence here as well, the documentary could ensure that even the average citizen gets some background knowledge that lifts the necessary discussion to a somewhat more rational level. And even if it doesn't, Sattel's film at least offers some really great images that evoke very different feelings in the simplicity of their presentation. And that makes Under Control well worth watching, despite its obvious lengths!