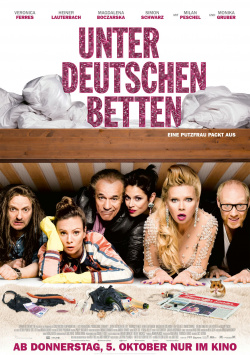 A life of glamour and luxury - Justyna Polanska (Magdalena Boczarska) can only dream of that. But she also knows that all that glitters is not gold. As a cleaning lady for the rich and famous, she gains many intimate insights that her employers naturally don't want to share with the public. She has also been cleaning for producer Friedrich Berger (Heiner Lauterbach) for a long time. And so she also overheard how he cheated on his girlfriend, pop starlet Linda Lehmann (Veronica Ferres), again and again and dropped her after an embarrassing TV appearance. Justyna has no sympathy, as Linda has always treated her like dirt. But when the jilted Linda wants to save her career, tries to break into Friedrich's house and is caught by Justyna, events take a turn for the worse: Justyna breaks her hand through Linda's fault and now has to hand over her duties to the pop singer. In return, she lets the singer into her employer's studio. When Linda also moves into Justyna's flat share, the chaos seems perfect.

2011, a certain Justyna Polanska caused a stir with the humorous tell-all book Unter deutschen Betten - Eine polnische Putzfrau packt aus. The Polish woman, who of course wanted to remain unrecognized, had the goal with the book not only to entertain, but also to draw attention to the situation of cleaners, who often have to work below the minimum wage and face humiliation or racism. In fact, however, behind the pseudonym was not a real Polish cleaning lady, but the non-fiction author Holger Schlageter, whose fictional character had emerged from conversations with a real Polish cleaning lady and other cleaners.

The book's huge success led not only to a second volume, but also to the sale of the film rights. However, director Jan Fehse's adaptation is only very loosely based on the bestseller. Rather, Justyna's experiences serve only as a loose framework for the story of one-hit wonder Linda Lehmann, who is desperately fighting for her comeback to hit heaven. This dramaturgical decision is one of the main reasons why this dud doesn't work. Sure, it's quite amusing to see Veronica Ferres or Heiner Lauterbach make a fool of themselves with obvious playfulness. But the film misses the actual topic of the book almost completely and is as a comedy unfortunately one thing not at all: funny!

Because even more than the book, the movie sinks into worn-out clichés, and even the gags seem dug deep from the mothballs. The fact that almost every supposedly funny moment is accompanied by the first bars of a cover version of the Britney Spears hit Baby, One more time gets on your nerves as fast as the bad hit songs of Linda Lehmann. It becomes really embarrassing, however, when after the film after quite a few Kalauern and jokes to the end tries to build a touch of depth into the plot.

Unter deutschen Betten is a wasted opportunity to stage a biting satire. The result is a really flat comedy, entirely tailored to an effortful Veronica Ferres, who, like her film character, gives everything to please the audience, but ultimately fails because of the script and the staging, which lacks any subtlety. Better clean under your beds than spend money on this comedy. Only very conditionally for fans of films like Antonio, ihm schmeckt`s nicht or Macho Man just worth seeing!

Cinema trailer for the movie "Under German Beds (Deutschland 2017)"
Loading the player ...