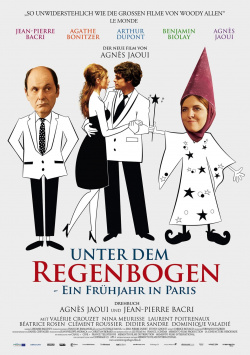 Once upon a time. a young girl. Her name was Laura (Agathe Bonitzer), a 24-year-old woman of innocent beauty who had been waiting for her Prince Charming for many years. Laura had almost given up hope that she would find happiness when the charming musician Sandro (Arthur Dupont) crossed her path at a party. There was a huge spark between the two and it all looked like their story could end with the words: and they lived happily ever after. So great seemed the love, so close the connection between their souls. But then one day Laura set out to visit her Aunt Marianne (Agn&egrave;s Jaoui). On her way through the forest, she met Maxime Wolf (Benjamin Biolay), a dark seducer who puts Laura's heart to the test. Will she be able to resist the wolf and confess her true love. Or perhaps fairy tales are just too good to be true after all?

With Under the Rainbow, acclaimed writing duo Agn&egrave;s Jaoui and Jean-Pierre Bacri (Look at Me) have made a very successful return to France. Directed by Jaoui, who also took on one of the key roles in the film, the result is a playful boulevard comedy that is bursting with ingenuity at many moments, but also loses sight of the story a little at times. As a result, quite wonderful moments alternate with scenes that seem a bit tame or even inconsequential in direct comparison.

The film gets an enormously high entertainment value from the fact that the audience simply enjoys recognizing the many fairy tales that have been worked into the script and enjoys playing with the familiar motifs. This is because Jaoui and Bacri always manage to counteract the audience's expectations built up by the use of familiar elements with surprising twists and turns. The likeable, unspent actors and a somewhat unconventional set reinforce the positive aspects of the film, which in many moments clearly stands out from the crowd of other French comedies.

At times, however, the production seems a little too concerned with being different, which unfortunately has the effect of making it a little tiring and long-winded for the viewer. The otherwise very positive and rousing overall impression is marred a bit by this. Moments that invite to laugh or dream alternate again and again with scenes that seem a bit unwieldy and meaningless, from which the fairytale-like charm of the production suffers. Thus, Under the Rainbow is for long stretches a very successful and original piece of French arthouse cinema, which in the end, however, is denied an unqualified recommendation. Nevertheless, the small weaknesses and less successful scenes don't weigh so heavily that lovers of fairytale romantic comedies of a different kind won't get their money's worth here. And for that there is a more than deserved: Worth seeing!

Cinema trailer for the movie "Under the Rainbow (Frankreich 2013)"
Loading the player ...