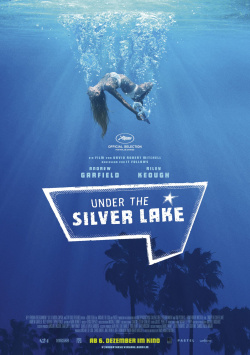 Under the Silver Lake

Sam (Andrew Garfield) lives in a small apartment in Los Angeles. Sam has no money, the landlord threatens him with eviction, but he still doesn't think about getting a job. He'd rather hang out with his buddy (Topher Grace), watch his free-spirited neighbor with binoculars, or read comic books. But then he meets the beautiful Sarah (Riley Keough), who even invites him over to her place. Sam can hardly believe his luck, even though Sarah's suddenly appearing roommates prevent the two from ending up in bed at the last moment. The next day, as Sam tries to pick up where the previous evening so abruptly ended, he finds that Sarah has disappeared without a trace. When Sam begins a search for his dream girl, it's the start of a mad odyssey through the big city - and soon he seems to get caught up in a web of conspiracies and urban myths.

Under the Silver Lake is the follow-up to David Robert Mitchell's surprise success It Follows. If that one was unusual but still clearly in the horror genre, the case for Under the Silver Lake is much more difficult. When I was asked after the press screening if I liked the film, I could answer in the affirmative, but I had to say: I have no idea why. And upon further reflection, that hasn't changed much. Certainly, there are some aspects I can clearly name that contributed to me having a really good time for over two hours.

There are, for instance, the very clear references to other films and works by great directors like Alfred Hitchcock. Mitchell bows to Hollywood in a very original and at the same time charming way. You have to love that as a cinephile. Then there's lead actor Andrew Garfield, who shuffles through the abstruse story in such a wonderfully whimsical way that it's simply a great pleasure. And then there are just delightfully weird moments that hit right at my humor center.

However, what I actually saw there is hard to define. The story is convoluted, absurd and keeps getting lost in a flurry of images or absurdities. That shouldn't really work - but it does. Because even though as a viewer you're kind of at a loss the whole time, Mitchell seems to know exactly what he's doing. He always presses the right button just when you're about to mentally bow out, so that your attention immediately flares up again.

Under the Silver Lake is an enigma - and that's probably a good thing. It's a film that works, even if you might not understand it one hundred percent. If you enjoy weird, non-conformist cinema from Hollywood, this madcap mix of genres is a must-see: absolutely worth seeing!

Cinema trailer for the movie "Under the Silver Lake (USA 2018)"
Loading the player ...