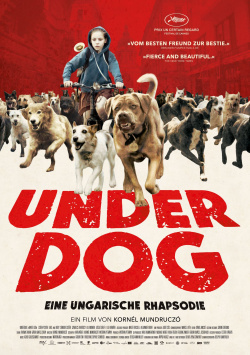 Life doesn't mean well with 13-year-old Lili (Zsofia Psotta). First she has to move in with her father, who shows no interest in her at all and constantly nags her. And then her beloved mongrel dog Hagen becomes a victim of a new measure to regulate dog breeding. According to this measure, dogs that are not purebred will be charged a high tax, which Lili's father doesn't want to pay. Therefore Hagen is to be taken away by dog catchers. Of course Lili wants to prevent this and so she helps her four-legged friend to escape. After Hagen has evaded several dangers on the streets of Budapest, he finally ends up at the animal shelter. There he becomes the leader of a bloody dog revolution that even Lili seems unable to stop...

With his sixth feature film Underdog, Hungarian director Kornél Mundruczó has created a very interesting, surprisingly multi-layered work that reveals many surprisingly intense moments as well as a few lengths. The whole thing starts as a quiet coming-of-age drama about a young girl suffering from her parents' separation and her father's disregard. After about forty minutes, the focus of the film changes and now the focus is on Hagen and other mongrel dogs rejected by society. And gradually, the quiet teen drama turns into a dark horror thriller in the tradition of The Birds. When a pack of wild dogs chases through the deserted streets of Budapest, it always provides atmospheric goosebump moments. A few gory scenes add effective horror accents.

The rebellion of the outcast dogs, who are seen as inferior by the state and therefore cast out, naturally offers plenty of room for interpretation. But even those who don't see social criticism in it are guaranteed to be swept away by the second half of the film. The film was shot only with real dogs, which were supervised by first-class animal trainers. Mundruczó deliberately refrains from using computer effects, which clearly intensifies the effect of the dog attacks. With his animal actors, for whom there was - no joke - a dog palm at the Cannes Film Festival, the filmmaker creates some scenes that burn themselves into the memory of the audience for a long time.

However, it must also be said that there are some clear lengths in the course of the two-hour running time. Especially the first hour drags on. Certainly, a careful build-up of the story does make sense. But in the end, the exposition could have been much more streamlined without letting the audience miss what message the film wants to convey. The difficult relationship between Lili and her father already becomes clear when the two meet for the first time, so there wouldn't have been a need for many more explaining scenes. The worn beginning makes it hard to find access to the story, which is a real pity considering the strong second half.

However, even if the overall impression is marred a bit by this, Underdog is overall a really special film and an absolutely worth seeing contribution to the sub-genre of animal horror. A in the second half really gripping parable about two-class societies and social injustice, which shows that uncomfortable problems can not simply be locked away. For friends of the more demanding horror and abysmal dramas is therefore: Worth seeing!