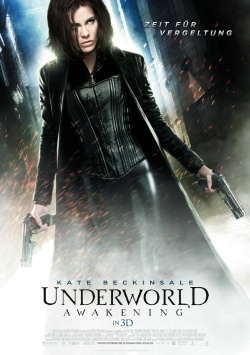 After a six-year hiatus, Kate Beckinsale returns to the big screen in her role as vampire fighter Selene. After relinquishing the helm to Rhona Mitra in the third installment of the Underworld series, she once again slips into the skin-tight latex suit for Underworld Awakening as she returns to vigorous action in the eternal battle between vampires and lycans.

Fifteen years Selene has spent in captivity. Having spent that time in a freezing deep sleep, it has only been moments since she was separated from her beloved Michael. But now that she has finally managed to escape her prison, she finds that the world around her has changed. Humans now know of the existence of the vampires and Lycans and see them as a plague that must be eradicated. The feuding clans, if they could escape the humans' attempts to eradicate them, have retreated underground in small groups. But this is far from the end of the danger. For Selene was unwittingly involved in allowing the humans to work on breeding a new species. And the first test subject was able to escape together with Selene. Who or what this being is, however, the vampire warrior does not yet suspect.

Underworld Awakening is again a big step in the right direction after the rather weak prequel Uprising of the Lycans. Swedish directors Måns Mårlind and Björn Stein, who made their U.S. debut with the thriller Shelter, haven't created a particularly intelligent or even original piece of horror cinema, to be sure. The characters are simply too one-dimensional for that, the dialogues bloodless and the dramaturgy absolutely predictable. But the staging is so tight and the action so entertainingly staged that the justified criticisms fade into the background there.

Kate Beckinsale still cuts a damn good figure as a vampire warrior in her third attempt. Whether with knives, pistols or her fan teeth, Selene always deals out powerfully in the fight against her opponents - and Beckinsale brings this not only very handsome, but also absolutely convincing across. The rest of the cast, however, is already forgotten while watching, even if there are some character actors like Charles Dance or Stephen Rea among them. Underworld Awakening is a pure vehicle for Beckinsale and that's thanks to her convincing performance absolutely okay so.

Who liked part 1 and 2, which will certainly also have fun with this fourth film. This is clouded - in the truest sense of the word - only if you put on 3D glasses. Because the already very dark picture becomes even darker in the 3D version, of which especially in the action sequences some very worth seeing details are lost. Granted, there are the one or other successful 3D effect. But over large parts of the film one can confidently take off the glasses, since the three-dimensional effect is hardly existent and really only contributes to the darkening of the picture.

So if you don't expect more than to be well entertained with some hefty effects, a lot of CGI blood, an attractive leading lady and a few cool sayings, you can safely go for another visit to the Underworld universe. But if you expect something like a meaningful plot and not so bloodless characters, you should give this movie a wide berth. Because Underworld Awakening is just pure fun cinema, horror action without sense and reason, and maybe just because of that enormously entertaining. So for Selene fans well worth seeing!