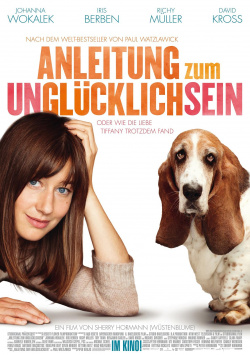 When it comes to her job, Tiffany Blechschmid (Johanna Wokalek) is perfectly organized. With a lot of love and dedication, she has fulfilled a real dream with her well-run delicatessen in Berlin-Kreuzberg. It's just too bad that she doesn't want to succeed in her private life. Because when it comes to men, everything that can go wrong with the dreamy Tiffany actually goes wrong. Whether it's the charming policeman Frank (Benjamin Sadler), the photographer Thomas (Itany Tiran) or her former piano teacher Hans (Richy Müller), as soon as Tiffany tries her hand at amorous adventures, her path seems to be paved with faux pas. It doesn't help that her dead mother (Iris Berben) keeps appearing and terrorizing her with sage advice. But is Tiffany really doomed to unhappiness, or does fate have another surprise in store for her? Instructions for Unhappiness begins with the disclaimer that the following film is not a comedy. It may be assumed that this hint is actually not meant in the first place, because the movie repeatedly tries to make its audience laugh. However, this only works to a very limited extent. It always seems as if the film, which is loosely based on the world bestseller by Paul Watzlawick, wants to be something like the German equivalent of The Fabulous World of Amélie, but without even coming close to its charm and originality. While the film is brimming with potentially endearing and interesting characters, Sherry Hormann (Desert Flower) simply fails to flesh them out in a way that actually reaches the audience. This may be because the wordplay feels strained, or because the microcosm in which the characters move isn't fleshed out enough to create real magic. As much as the actors try to make their characters seem charming and likeable, which David Kross succeeds in doing the most, there is not much sympathy for them in the end. Johanna Wokalek is the worst affected. The talented actress plays Tiffany in a way that makes you want to like her as a viewer. You want to wish her luck in love, want someone to discover what a lovable person is underneath the chaotic facade. And even if Wokalek is able to save a lot here, the script and the staging make it almost impossible for her to claim the sympathy that is actually due to her character. It would now be easy to simply dismiss Guide to Unhappiness as a failed attempt at a German romantic comedy of a different kind. But what ends up making the film a real disappointment is that its actual potential is palpable almost every second. You get the feeling that the production is always skirting a hair's breadth of what it could have been. Whether it's with the dead mother who can't refrain from her lectures even from beyond the grave, with the cop who has a little too much testosterone, or with the staff at Tiffany's Delicatessen, the possibilities of charm, wit, big emotions, bite and originality shine everywhere. But whenever you're sure that the film will now manage to hit the mark, it misses the mark again by a hair's breadth. Guide to Unhappiness could have been a completely charming film. The ingredients are all there, from the actors to the character constellation to the book premise. But unfortunately, the result is a very weak film that seems to take its title all too literally. For happily, the audience is unfortunately not released from this film. Too bad!

Cinema trailer for the movie "Guide to Unhappiness (Deutschland 2012)"
Loading the player ...