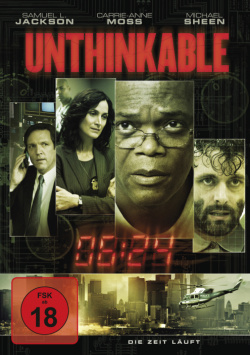 Film: The unthinkable has happened: somewhere in the US, alleged Islamist terrorist Steven Arthur Younger (Michael Sheen) has hidden three nuclear explosive devices. While Younger has been apprehended, he is still stubbornly silent, not revealing his demands or where the bombs are hidden. This is about to change when interrogation professional H (Samuel L. Jackson), one of the most feared and ruthless experts in his field, is brought in on the case. But his methods meet FBI agent Helen Brody's (Carrie-Anne Moss) scorn and stiff resistance. But H gets permission from on high to use any means necessary to get Younger to tell him where he hid the bombs. But when Younger remains silent and the first explosive device is detonated, Helen has to throw her scruples overboard and realize that this man can't be broken with normal interrogation methods. But does the end really justify all means?

With the biting satire "Army go Home!" director Gregor Jordan already took a critical look at the practices of the US military in 2001. In "Unthinkable" he also takes up a similar theme, although this time he does without humor and instead embeds the whole thing in a suspenseful thriller plot. At first glance it seems as if Jordan is presenting a plea for the most extreme interrogation methods and thus agrees with the policy that George W. Bush's Vice Dick Cheney has just advocated. But the film's real point is exactly the opposite. The more is revealed about Younger's actual intentions, the more H gets into his overly brutal interrogation methods, the more even Helen, who is most likely to be an identification figure for the viewer, falters with her opinion.

Because Jordan doesn't make it so easy and present a one-sided statement. Rather, he lets all sides deliver comprehensible arguments. So even the viewer soon finds himself in a quandary and has to ask himself: how far may/should one go to prevent unnecessary bloodshed? But as effective as this dilemma is, especially with the great performances of Samuel L. Jackson and Michael Sheen, who perfectly avoids portraying a one-dimensional villain, the director intensely threatens to fail in his own ambitions in the final act. For while many aspects of the production seem quite realistic, the whole thing overshoots the mark too much towards the end. The in some respects open ending of the cinema version makes up some ground there, nevertheless, given the successful build-up in the first two thirds, a slightly sallow aftertaste remains in the end.

But the bottom line is that "Unthinkable" is quite convincing thanks to the good actors and the thought-provoking story and thus offers thriller entertainment at a high level - even if this can not be maintained until the end. Worth seeing!

Picture + Sound: The bright, yet undercooled atmosphere of the film, which director Gregor Jordan has quite deliberately used to intensify the power of the story, has been well implemented on the DVD. However, the overall sharpness could be much better and in some places there is slight noise. The sound remains rather focused on the frontal area and only unfolds some dynamics in a few sequences. Good, but not really mind-blowing.

Extras: The DVD has only an audio commentary by director Gregor Jordan to offer. In it, Jordan goes into great detail about the technical aspects such as set design and lighting, in addition to the story, and reveals how he was able to use inexpensive stock footage to make the film look like a major motion picture production despite a rather low budget. In addition, he talks about an alternate ending that was staged because the ending shown here didn't really go over well with test audiences. But since the production company went out of business, the alternate ending couldn't be tested, so they stuck with the original ending (the extended, weaker ending is available in the extended cut, but the one in the theatrical version is definitely preferable). An interesting commentary, but just too little as the only extra.

Conclusion: "Unthinkable" is a tense thriller that only at first glance passes on a somewhat questionable moral to its audience. A closer look reveals a bitter reckoning with the interrogation tactics of the US military and the American government's anti-terrorism campaign. Convincingly acted and solidly realized, this DVD premiere proves to be a real insider's tip - even if the disc has hardly any extras on board