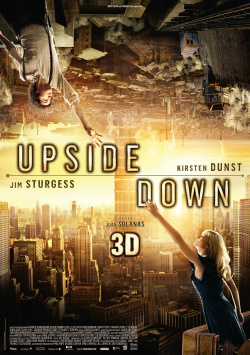 Adam (Jim Sturgess) lives in a universe where two worlds with opposing gravitational pulls live directly across from each other. While prosperity reigns in the upper world, allowing its inhabitants to live a carefree life, those on the lower world eke out a dreary existence defined by poverty. Interaction between the two worlds is only allowed in strictly controlled exceptional cases and is otherwise punished with severe penalties. When Adam invents a means by which the upper world's beauty industry could be revolutionized, he is given permission to work at TransWorld, a corporation spanning both worlds. Here he meets again young Eden (Kirsten Dunst), with whom he had fallen in love as a boy. But years ago the two were separated from each other. Adam now wants to try everything to finally win his great love for himself. But not only that Eden is from the upper world and so they are separated by gravity and political borders. Eden is also unable to remember him due to an accident. But these are not reasons for Adam to give up. After all, Eden is his true love - and as we all know, that knows no boundaries.

The idea for his second feature film, Upside Down, came to French-based Argentine director Juan Solanas in a dream. The image of a man standing on the top of a mountain looking up at a woman also looking down at him from the top of a mountain just wouldn't let him go. And so he created a love story around this dream image, whose rather classical structure is surrounded by an imaginative framework. For the cinematic realization Solanas had a rather handsome budget of 60 million dollars and a first-class creative team in front of and behind the camera at his disposal. The result is a rush of images that clearly shows its dreamlike origin in the truest sense of the word. Dramaturgically, however, the fantasy romance has some clear weaknesses.

In the beginning, Solanas still succeeds very well in drawing the audience into the fascinating double world of Upside Down. The mix of wonderful imagery and explanatory vocie-over commentary by Adam allows the director's ambitious vision to unfold very well. Although the images look very artificial at times and don't seem quite as technically polished as, say, the comparable effects from Inception, this fairy tale works just fine from a visual standpoint. But about halfway through the running time, it becomes clear that the care Solanas has put into building his story isn't enough to carry it through to the end. Too often he gets lost in his imagery, with character and story development falling by the wayside. As a result, some plot elements, especially in the final third, seem overly rushed or very superficial, which unfortunately causes the emotional connection to the characters to diminish significantly.

Instead of a big goosebump finale, for which this film is virtually predestined, a rather tepid resolution is presented that simply doesn't live up to the expectations that built up in the first hour. You get the feeling that Solanas ran out of ideas here and didn't quite know how to coherently finish his story himself. As such, Upside Down leaves you with a slightly ambivalent impression. The movie is nice to look at, it's full of fantasy and obvious heart and soul. On the other hand, especially towards the end it lacks the narrative finesse that would have been necessary to make the whole thing more than just some nice dream pictures. Therefore: only for viewers who like to lose themselves in imaginative dream worlds and who can overlook dramaturgical shortcomings, absolutely worth seeing!