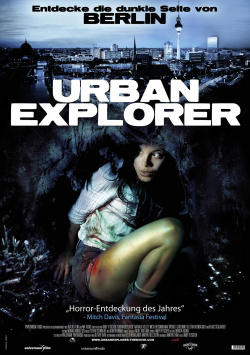 They are looking for the ultimate thrill and arrange to do so on the Internet: a group of young tourists who have never seen each other before meet in nocturnal Berlin to be guided into the tunnels beneath the city by German urban exploration professional Dante (Max Riemelt). Because somewhere down there is supposed to be a secret bunker containing forbidden murals from the Nazi era. But the adventurous trip turns into a nightmare when Dante falls and breaks his leg. While two young ones from the troupe head off to get help, young American Denis (Nick Eversman) and his Latin girlfriend Lucia (Nathalie Kelley) stay with the injured man. But then the guard Armin (Klaus Stiglmeier) suddenly appears, who at first seems extremely helpful. The young tourists hope to get out of this dicey situation in one piece But in truth, the horror has just begun.

Urban Explorer is in itself a typical low-budget horror film. The story is quite simple, the characters are clichéd, their actions are not always comprehensible and the actors act accordingly a bit wooden. And yet, on balance, the whole thing works surprisingly well. This may be due to the fact that director Andy Fetscher and his team financed the film without funding and thus had the freedom that other shoots lose due to interference from the studio and producers. In addition, the film was shot exclusively on original locations, which sometimes even had to be entered illegally, which gives the story an extremely dark, ominous atmosphere that is very conducive to the suspense factor.

The team responsible for the effects also did a damn fine job. There's one situation in the film (which admittedly won't be given away here) that is so convincing, thanks to great practical effects, that it should turn the stomach of even hardcore horror fans a little. Here, but also in other places, it's noticeable to Urban Explorer that its makers not only like the genre, but are also passionate about filmmaking itself. So some flat dialogues and clichéd characters are gladly forgiven.

The wheel is reinvented here admittedly not. But the atmospheric locations, the good effects and the passionate staging make Urban Explorer an entertaining and thoroughly exciting horror film that uses a completely different side of Berlin to terrify its audience. And for that, despite the aforementioned weaknesses, the bottom line is a well-deserved: worth seeing!