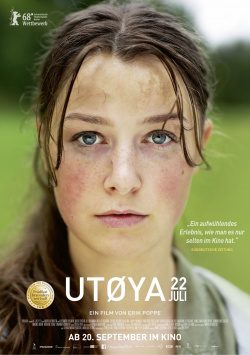 There is excitement among the youngsters at a summer camp on the Norwegian island of Ut&oslash;ya when they learn of bombings in Oslo. Some of the children are worried about their loved ones, while others are engaged in discussions about the political situation in the country. When shots are suddenly fired, terror comes straight to the small island idyll. 18-year-old Kaja (Andrea Berntzen) flees into the forest with a few other teenagers, but then returns to the camp despite the danger to look for her younger sister. What follows is about 90 terrifying minutes of fear and death that will traumatize all of Norway for years to come.

The horrific terrorist attack that claimed the lives of 69 people on the small island of Ut&oslash;ya on July 22, 2011, is dealt with in a very haunting way in Erik Poppe's real-time drama. Shot in one take, the film deliberately refrains from showing the assassin or naming him. In Ut&oslash;ya 22 July, the victims are meant to be the full focus. The viewer experiences the events firsthand from the point of view of Kaja, a fictional character. This is, of course, anything but entertainment cinema. Rather, it is a harrowing experience to engage with.

because there are times when the camera lingers on the forest floor with the protagonists for several minutes, or rushes around in complete confusion, past panicked teenagers or people who have been killed. It's exhausting and grueling - and that's exactly what it's supposed to be. Poppe wants the viewer to empathise with the confusion, fear and perplexity of the people who were actually going to spend their holidays on the island that day.

Totally, of course, he cannot succeed in this. But with the means available to him as a filmmaker, Poppe comes frighteningly close to reality. The only question is: Does it have to be? Who wants to voluntarily expose himself to something like this? Who goes to the cinema to feel bad afterwards? Those whom such a film was intended to reach would never watch it. So it's hard to say whether a work like Ut&oslash;ya 22 July really serves a purpose - other than to show what power cinema can have. But in the end, everyone has to know for themselves whether they want to be sprinkled in the cinema or go on a trip full of unfortunately very real horror. But for its emotionally disturbing power alone, this film deserves to be seen!