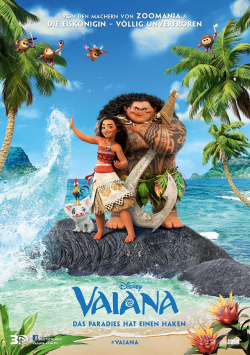 Vaiana - Paradise Has a Hitch

16-year-old Vaiana (voiced by Lina Larissa Strahl) will one day join her father, the chief of Motunui Island. For Vaiana, being a good leader also means knowing what lies beyond the ocean that surrounds her island. But no one in her tribe ventures beyond the reef in their boats, and Vaiana's father forbids his adventurous daughter to get too close to the water. But then the fish disappear and the plants on the island become sick. It seems the legend of the mother island, Te Fiti, is coming true: Supposedly, demigod Maui (voiced by Andreas Bourani) has stolen the heart of Te Fiti and now darkness is slowly but surely spreading across the entire sea and its islands. Vaiana knows what to do: she must find the heart of Te Fiti and make Maui return it to the place from which he stole it. And thus begins a whirlwind adventure that holds more danger than Vaiana first thought.

Vaiana - Paradise Has a Hitch is the latest effort from directing duo Ron Clements and John Musker, who have previously created the classics Ariel the Mermaid and Aladdin, among others. The story of young Vaiana and the demigod Maui is a real visual treat. There are many fascinating, but also beautiful images in which you can really lose yourself. And especially characters like the somewhat simple-minded chicken Heihei provide many really good laughs. Dramaturgically, however, this colorful adventure rides on a very conventional track, which also includes the many unavoidable songs.

No question, especially for girls Vaiana is really a great heroine and also the songs - similar to The Ice Queen - will be heard in many children's rooms in continuous loop. However, that does little to change the fact that the story and music lack that certain something that has made other Disney flicks timeless classics. You can tell how hard the creators were trying to give the film a distinctive originality. Maui's constantly moving tattoos, for instance, are a good example of this. And in a way, it works. But as soon as the story isn't carried by great pictures and such nice ideas, it becomes clear how ordinary this movie has become in the end.

A wonderful prequel, a few adorable moments, the one or other extremely funny moment and of course the really great animations make Vaiana - Paradise has a Hitch despite its weaknesses at the end yet a must for all Disney fans and exciting entertainment for the whole family. Not the best Disney film of recent years, but much better than many other animated films that have been released in recent months. For this there is then at the end also still a clear: Absolutely worth seeing!

Cinema trailer for the movie "Vaiana - Paradise Has a Hitch (USA 2016)"
Loading the player ...