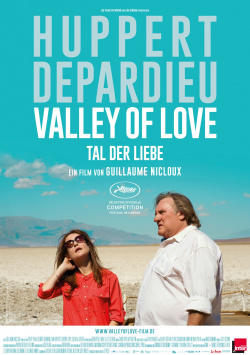 Isabelle (Isabelle Huppert) and G&eacute;rard (G&eacute;rard Depardieu) were once happily married. But that is long gone. They have long since gone their separate ways, connected only by their shared son Michael. But now Michael is dead. At only 31 years old, he took his own life. His last wish to his parents was for them to meet in Death Valley at a specific time and visit various stations there over the course of a week. Driven by a mixture of anger, incomprehension and grief, the two agree to the absurd program their son has designed for them. But will this week actually bring them anything like redemption?

Valley of Love is an art film. This is clear from the minute-long shot that shows Isabelle walking around the hotel grounds. Where one is quickly tempted to say boredom, some viewers just see great cinematic art. And it is precisely for such arthouse lovers that this drama about coming to terms with grief, letting go and forgiveness is made. Director Guillaume Nicloux deliberately brushes his production against the mainstream. He takes any form of pace out of all scenes so that the audience feels the inertia that is virtually forced upon the protagonists by the extreme heat in Death Valley. At the same time, it also creates the impression of a certain paralysis that Isabelle and G&eacute;rard have felt since their son's suicide. In this respect, the pace of the film is exhausting, but absolutely appropriate to the story.

Valley of Love basically has three main actors: in addition to Isabelle Huppert and G&eacute;rard Depardieu, who were here together in front of the camera for the first time since 1980, this is the fascinating landscape of Death Valley National Park. And so it is the almost magical images captured by cinematographer Christophe Offenstein that give the story an atmosphere all its own. In it, the somewhat esoteric part of the film can unfold well, without seeming too intrusive or too cheesy. But in order for this aspect to unfold its full emotional power - which is immensely important especially for the ending - you have to be willing as a viewer to get involved.

Then Valley of Love is undoubtedly an expressive, visually powerful drama with good actors and a moving story. However, if you fail to be won over by the languid narrative flow and the esoteric aspects of coming to terms with grief, then unfortunately the whole thing is little more than extremely beautifully filmed boredom. And therefore, only for the audience that likes to indulge in such somewhat unwieldy art house films, a clear: worth seeing!

Cinema trailer for the movie "Valley of Love (Frankreich 2015)"
Loading the player ...