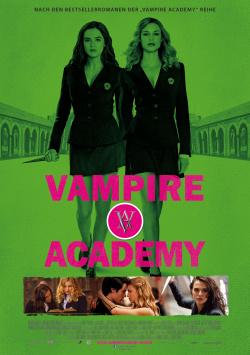 There are moments when Rose Hathaway (Zoey Deutch) wishes she were a normal teenage girl with normal teenage problems. But Rose is a dhampir - half-human, half-vampire - whose job is to protect the life of her best friend, Lissa Dragomir (Lucy Fry). For Lissa is a Moroi and the last living member of the Dragomir family. And just because of that, she has become the object of desire for the evil Strigoi vampires, who must drink the blood of Moroi vampires for their immortality and seek to wipe out their twelve royal families forever. Within the walls of St. Vladimir`s Academy, the girls were supposed to be safe and trained for their future destinies. But evil is already closer than the girls would like. The fact that Rose is also hormonally distracted by her new coach and mentor Dimitri (Danila Kozlovsky) doesn`t make things any easier.

Vampire Academy is based on the book series of the same name by Richelle Mead, which is extremely popular with some younger readers in particular. Mark Waters (Girls Club) has taken the first volume, Blood Sisters, from a script by his brother Daniel and turned it into an entertaining teen fantasy adventure with a fair amount of wit and irony, which has some very positive aspects to offer, but at the same time suffers from some distinct weaknesses. One of the strongest points are certainly the attractive actors and actresses. Especially Zoey Deutch cuts a really good figure as the cynical fighter. Embedded in a visually very appealing and by a snappy soundtrack (among others by Katy Perry) accompanied production, the good-humored play of the actors raises the entertainment value of the film significantly.

But unfortunately, the whole thing is not as biting and self-deprecating at the end, as Mark Waters probably intended. With Girls Club he still managed to stage a perfect mixture between humorous genre contribution - in this case a teen comedy - and biting persiflage. That it succeeded, however, was largely due to Tina Fey's very clever script, which the dialogue written by Daniel Waters can't really compete with. For what Mark Waters probably had in mind, it would have taken a writer of the caliber of Joss Whedon. It's not for nothing that Vampire Academy always reminds you of Whedon's Buffy - while at the same time making it clear what made this series so popular and what Rose, Lissa and co. ultimately lack. It's nice that there's no attempt to create a Twilight-style fantasy monzette here, but to approach it with some self-mockery. But the sayings, with which especially Rose is supposed to appear cool and tough, seem to be too forced and stilted to be able to really ignite.

In addition, the action seems badly rushed, especially in the last third. The story is too overloaded with all its prophecies, different types of vampires and rules that it's easy to lose track as a viewer without prior knowledge of the book. Moreover, both the characters and the story itself remain too superficial as a result. This leads to the fact that the movie is kind of fun and can also entertain, but at the same time it feels like a car that always stalls just before it actually starts. The noises it makes when trying to start sound promising, but the final spark to ignite it properly is simply missing.

Since Vampire Academy has so far failed almost completely at the international box office, a sequel is rather unlikely. This is a shame in that, despite its obvious flaws, the film reveals a lot of potential that could have been well developed in a second installment. Taken on its own, however, this film - also because of its rather open ending - is only a somewhat lukewarm affair. For the intended target audience certainly nice, but also a little bloodless. And so, despite an effortful Zoey Deutch, a as always good Gabriel Byrne and despite some really successful moments, there is only a bottom line: limited worth seeing!