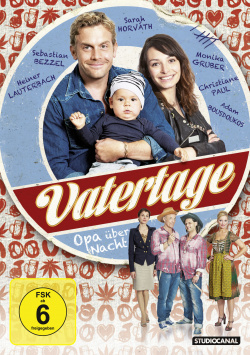 Film: 36 year old Basti (Sebastian Bezzel) leads a relaxed life in Munich as a rickshaw driver and convinced single. For him, responsibility is a foreign word. He prefers to enjoy life to the full: playing music with his band, the "Wadlbeißern", seducing attractive tourists or enjoying a nice Weisswurst in a relaxed way. But the beautiful lottery life is over at one stroke when 17-year-old Dina (Sarah Horváth) stands at his door and reveals to the bewildered Basti not only that she is his daughter, but that she already has a child herself. The new grandfather is now finally supposed to fulfil his father's duties and pay her the child benefit she is entitled to after seventeen years. On the other hand, Dina's mother, with whom Basti had a One Night Stand 18 years ago, would not shy away from a maintenance claim. But the 15,000 euros the girl is asking for is something that the artist can't find that easily, of course. And while he tries to scrape the money together with his sister Thea (Monika Gruber) and his father Lambert (Heiner Lauterbach), a timid friendship develops between Dina and him, which, however, still stands a big lie in the way...

"Vatertage - Grandpa overnight" does not really ignite at first sight. The beginning of the comedy is very bumpy and very clichéd. The badly composed Ossi dialect of Dina's girlfriend Natalie quickly gets on your nerves and doesn't promise anything good for the further progress of the movie. But it's worth staying on the ball. Because once director Ingo Rasper has found his pace and freed his characters from the initial clichés, the movie can unfold a lot of wit and charm, which in the end leaves a quite positive overall picture.

Sebastian Bezzel is a somewhat chaotic bon vivant who simply does not want to grow up and suddenly has to face an extreme responsibility. Somehow Bezzel's charming game makes it difficult for Basti to resent his all too obvious weaknesses and mistakes. And Bezzel also masters the many rather shallow gags or stale clichés with which this character is confronted with with bravura. And also the other actors make sure that the good mood, which they obviously had during the game, also spreads to the audience. And when you hear hip-hop brass music by Moop Mama, you can't help but be released from the film with a broad grin on your face.

Sure, "Father's Days - Grandpa Overnight" has its weaknesses. Again and again you twist your eyes in view of the really flat gags. But then there are moments when either the pictures, the gags or the cordiality hit the bull's eye. And in those moments it just doesn't matter how shallow the comedy is, how stale the clichés are or how predictable the story is. Because then the whole thing simply makes fun and good mood. And that's exactly what movies are supposed to be for. So if you don't expect much, if you like German comedy with a slightly Bavarian touch and if you don't insist on deep humor, this movie can entertain you really well. And in this case also applies: Worth seeing!

Picture + sound: The DVD makes a pretty good technical impression. Although the overall sharpness could have been better in a few moments, the small weaknesses that can be detected here are compensated by the captivating colouring. The sound, which is available in stereo, but also in a Dolby Digital 5.1 surround mix, primarily reproduces the events mixed centrally. From time to time, however, the film music and smaller sound effects ensure that the surround channels are used properly. Good.

Fazit: "Father's Days - Grandpa Over Night" turns out to be a very charming and funny comedy after a somewhat bumpy start, which scores particularly well with its charmingly drawn characters, the appealing visual realization and some really successful gags. Those who like more recent German comedies like "Schlussmacher" or "Mann tut was Mann kann" will certainly be entertained by "Vatertage - Grandpa overnight". Recommended