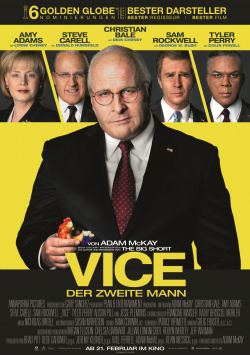 From 2001 to 2009, George W. Bush (Sam Rockwell) was considered the most powerful man in the world. But operating in his shadow was a man who had spent decades building his power in Washington and who is considered the real string-puller of this presidency: Dick Cheney (Christian Bale). But how did the man who was the youngest White House Chief of Staff under Gerald Ford and Secretary of Defense under Bush Senior become such a powerful Washington insider? And what role did his wife Lynne (Amy Adams) and his one-time mentor Donald Rumsfeld (Steve Carell) play in the process?

Answers to these questions director Adam McKay (The Big Short) tries to answer in his latest film Vice - The Second Man in an entertaining and enigmatic way. McKay goes stylistically similar ways, as in The Big Short: He serves partly very uncomfortable truths with a good portion of irony and lets explain somewhat complex contexts in a humorously simplified way. While in The Big Short it was Margot Robbie in a bubble bath who explained the pitfalls of the financial world to the audience, here Alfred Molina is allowed to explain some almost unbelievable powers of high-ranking US politicians in a wonderful guest appearance as a waiter. There the laughter is almost stuck in the throat.

Also Jesse Plemons as a mysterious narrator, whose role is revealed only at the end, acts perfectly as a mouthpiece for the viewer, who thus not only gets insight into the political career of Dick Cheney, but just also certain processes in US politics comprehensible explained. This is sometimes very amusing, but on the other hand it also makes you enormously angry. But McKay knows very well how to serve such material in an intelligent and entertaining way. In this case, it is not quite as clever and subtle as in The Big Short, but this unsparing portrait of a politician is always successful.

The unrecognizable Christian Bale leaves a lasting impression, not only because of the first-class work of the make-up artists. His acting is also convincing all along the line. The same goes for Amy Adams and Steve Carell. Oscar winner Sam Rockwell is well cast as George W. Bush, but his performance is too similar to the usual Bush parodies that there is no real own note to recognize.

If you like biting political satires that entertain, but also strain the intellect, you should not miss Vice - The Second Man. Not a stroke of genius, but very good, great acting and cleverly staged entertainment cinema. Absolutely worth seeing!