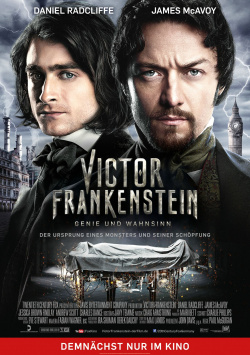 When young scientist Victor Frankenstein (James McAvoy) watches a hunchbacked young man (Daniel Radcliffe) save the life of fallen trapeze artist Lorelei (Jessica Brown Findlay) at a circus, he recognizes the great potential in this misfit. He frees him from the circus and from his hunchback and makes him his assistant. Under the name Igor Strausman, he is to help Frankenstein's groundbreaking research make a breakthrough. For the scientist wants to have found a way to cheat death. The closer Frankenstein gets to his goal of bringing a creature he created to life, the more he seems to fall prey to madness. Igor is unwilling to stand by and do nothing to save Victor Frankenstein from himself.

With Victor Frankenstein, director Paul McGuigan (Push, Lucky Number Slevin) tries his hand at a slightly different interpretation of Mary Shelley's well-known story, which has been adapted countless times. The famous monster hardly plays a role and only appears briefly in the last act. Rather, the friendship between scientist Victor Frankenstein and his sidekick Igor is the focus of the action. This has its appeal, but it also brings with it some problems. How Frankenstein frees the hunchbacked boy with no name from the circus is a bit too tumultuous, but is definitely rousingly staged. How he then frees him from his hunchback, however, is a bit of a stretch and seems to only serve to give Igor what should be an unnecessary love story.

Although there are some aspects of the production that don't quite want to work, the film still has its charms. This is primarily due to the character of Victor Frankenstein, who James McAvoy portrays as constantly walking on the edge of insanity. Igor as the voice of reason and thus the great sympathetic figure of the film also works very well. Admittedly, Daniel Radcliffe is nowhere near as challenged as McAvoy. Still, he is able to bring some interesting facets to the young man who is torn between his loyalty to Frankenstein and his ethical convictions. The dynamic between these very different characters is what ultimately helps this film overcome its flaws and makes it well worth watching, despite a few hangs.

The visuals are very atmospheric and the slight horror elements used, especially in the last act, provide a nice rise in the tension curve every now and then. Nevertheless, the feeling remains that a lot of potential was wasted here and that especially the romance between Igor and Lorelei doesn't really serve the story per se and therefore proves to be unnecessary ballast. In return, the obsessive hunt of the devout Inspector Turpin (Andrew Scott) is far from everything possible. Who simply appreciates atmospheric gothic horror and wants to see a different interpretation of a very well-known material, Victor Frankenstein can be recommended despite its clear weaknesses. But if you expect bloody monster horror with a lot of suspense, you will be bitterly disappointed by the first half of the movie. Therefore, the bottom line is only one: Worth seeing with small deductions