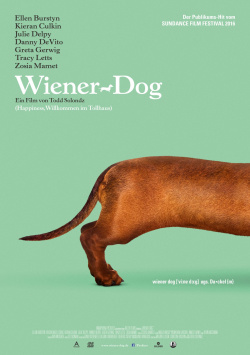 Director Todd Solondz ("Willkommen im Tollhaus") is known for his somewhat weird, unadapted films. He continues this tradition in his latest work "Wiener Dog". In the episode film he accompanies a dachshund lady with the different masters and mistresses, whose lives are given a little comfort and joy by the dog. First Wiener-Dog comes to little Remi (Keaton Nigel Cooke), whose love for the four-legged friend has fatal consequences after a short, beautiful time together: After the consumption of muesli bars the dachshund lady lands with the veterinary surgeon and is to be put down there. But Dawn Wiener (Greta Gerwig) knows how to prevent this. She kidnaps the bitch from the clinic without further ado and paps her up again. Wiener Dog now witnesses her rescuer meeting an old classmate (Kieran Culkin) and quickly getting involved with him on a trip to Oregon. After this adventurous journey she ends up in New York with a stale scriptwriter (Danny DeVito) who is still hoping for his big Hollywood breakthrough. And finally, Wiener Dog sits on the lap of a grumpy old lady (Ellen Burstyn) who receives one of the rare visits of her granddaughter (Zosia Mamet) - of course only because the money is needed for her friend's art project…

With a lot of black humor, profound satire and a touch of melancholy, Todd Solondz has staged a very unconventional piece of American arthouse cinema. Through the eyes of a dog, the viewer can take an unembellished look at various facets of American society. The focus is not on smooth ideal ideas, but on people with mistakes or those who are pushed to the margins of society because of their age or disability. Their stories are well observed snapshots, filled with profound dialogues and bitter humour.

That doesn't necessarily make for a hearty laugh, but it does almost always make for an amused smile that is only occasionally covered by a certain sadness. This becomes especially clear in the episode in which Wiener Dog lives with the screenwriter Schmerz, wonderfully embodied by Danny DeVito. A glance into the sad face of the man disappointed in life is enough to make every smile freeze on the spot. But also here Solondz manages in his very own way to save the viewer from falling into an emotional abyss by giving the episode a wonderfully evil twist.

Admittedly, the humor of the film is very special and those who can't get involved with the narrative tempo, the somewhat artificial dialogues and the very own visual language won't be able to make friends with this very unusual journey of a dachshund. But if you have a penchant for unusual auteur cinema, if you like abysmal humour and bizarre stories, you shouldn't miss this little Arthaus pearl. Absolutely worth seeing!