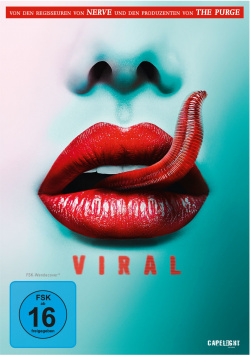 Film: Sisters Emma (Sofia Black D`Elia) and Stacey (Analeigh Tipton) lead a normal teenage life in a small American town. So far, their biggest problems have been what to wear or how to get cute guys to notice them. But that changes abruptly when a mysterious virus threatens all of humanity. Anyone who contracts it via the blood of an infected person is quickly transformed into a bloodthirsty beast. A state of emergency is declared and the girls barricade themselves in their home. Unfortunately, that can't stop Stacey from becoming infected either. But Emma won't give up on her sister so easily. She locks Stacey up and hopes to find a way out of this predicament with her boyfriend Evan (Travis Trope). But the virus can't seem to be stopped.

Directing two installments of the hit Paranormal Activity series, filmmakers Henry Joost and Ariel Schulman have successfully established themselves in the horror genre. After a foray into the world of the darknet and social media in the thriller Nerve, they now return to the world of scares with Viral. They're clearly not out to revolutionize the genre or redefine it in any way. Instead, an entertaining and for long stretches also pleasantly exciting genre contribution is tinkered with from already known set pieces, which may not all, but at least some cliché cliffs can avoid.

Sure, the dialogue isn't really award-worthy and the actors don't deliver Oscar-worthy performances. But let's face it - the movie wouldn't need that. The atmosphere is coherent, the effects convincing and the scare moments work neatly. What more could you want from a horror thriller like this? There are actually only two real points of criticism. For example, about halfway through the film there are a few long stretches, as the directors here rely too much on quieter moments, which are not really bad, but definitely a bit tough staged. The second point of criticism relates to the finale, which of course won't be given away here.

As with Nerve, Henry Joost and Ariel Schulman do not consistently follow the path laid out in the story to the end. True, that didn't turn out to be quite as striking and disappointing here as it did in Nerve. Still, a more uncompromising ending would have been much more effective here as well, guaranteed, than the somewhat soft-pedaled conclusion presented after 80 entertaining minutes. All in all, though, Viral is solid genre fare for those who don't like it too gory, but definitely thrilling. Two solid leading actresses and an oppressive atmosphere console over minor weaknesses. And so there is a deserved bottom line: worth seeing!

Image + Sound: The DVD's image pleases with a decent overall sharpness and a very atmospheric color scheme. Furthermore, since the black levels and contrasts are well matched, the oppressive atmosphere of the story can unfold well. The Dolby Digital 5.1 mix is primarily dominated by the dialogue, but has very good surround effects to offer whenever infected attack. Good.

Extras: Unfortunately, the DVD has no bonus material to offer apart from the trailer and other programme tips.

Conclusion: Viral is a decent genre contribution, which with its oppressive atmosphere as well as some good shock and suspense moments can comfort over many a cliché. The DVD is technically well done, but has no extras worth mentioning. As an entertaining plague horror for in between but still quite recommendable!