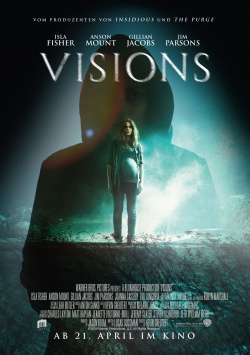 Since a serious car accident a year ago, young Julia (Isla Fisher) suffers from severe depression. These she has so far brought under control with medication. But now Julia is pregnant and does not want to take any more pills. Now a move from the hectic city to the countryside is supposed to put her life in order. Her husband David (Anson Mount) has fulfilled his big dream and bought a farm with vineyard, where he wants to press wine himself from now on. It is the perfect idyll for a small family. But appearances are deceptive. For soon Julia begins to hear strange noises and is plagued by terrifying visions. While David and her Art (Jim Parsons) try to convince her that this is just an extreme reaction to stopping her medication and that she should go back on pills, her new friend Sadie (Gillian Jacobs) is the only one who stands by her. But as the visions become more intense, Julia is firmly convinced that supernatural forces have a hand in this.

Visions is the latest scary flick from SAW 6 + 7 director Kevin Greutert. But who now expects hefty splatter interludes and gallons of film blood, which will be bitterly disappointed. Greutert uses more traditional scary effects, which are also used very discreetly. The atmosphere and the story with its numerous twists and turns are supposed to provide suspense and goosebumps. The viewer is left in the dark for a long time about what is actually being played here. Are we dealing with a variant of Rosemary`s Baby or rather with ghost horror in the style of The Grudge? Or maybe everything is completely different than expected?

When the resolution is finally presented, it is on the one hand quite exciting and effectively staged. But the big surprises are missing. Greutert presents these rather with his genre-unusual casting. For many roles he has cast with actors who are more familiar from comedy series or light entertainment cinema. Jim Parsons aka Sheldon Cooper from The Big Bang Theory, Gillian Jacobs from the acclaimed comedy series Community or Desperate Housewive Eva Longoria are not really expected in a scary movie as well as leading actress Isla Fisher (The Wedding Crashers, Shopaholic). But while Jim Parsons plays his role just too close to Sheldon Cooper and thus seems like a foreign body in the gloomy events, especially Gillian Jacobs convinces with a quite versatile performance.

Visions is solid genre entertainment, which can offer something like suspense after a somewhat tough beginning. But since there is nothing more than average and the film really has nothing to offer that makes it stand out from the crowd of similar works, scary fans should think twice if they really have to go to the cinema for this film or if the home cinema version will suffice. Therefore, the bottom line is only one: Worth seeing with small restrictions!