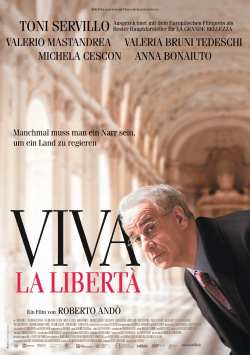 Lousy poll ratings, bad press, headwind from his own party - for opposition politician Enrico Oliveri (Toni Servillo) it's just too much. He packs his bags and leaves Rome head over heels to go into hiding in France with his former lover Danielle (Valeria Bruni Tedeschi). The disappearance of her boss threatens to throw the party into chaos during the important election campaign. Oliveri's closest colleague Andrea Bottini (Valerio Mastandrea) has the saving idea: he asks Enrico's twin brother Giovanni, an extremely eccentric philosopher, to pretend to be Enrico for a few days. Giovanni doesn't hesitate for long and accepts the offer - with unexpected consequences: for not only does he find pleasure in miming the politician. The new Oliveri is also surprisingly well received by the press and the voters. But can this deception be maintained for long?

Viva La Liberta reminds at first glance a little of the US comedy Dave with Kevin Kline. Here as there the actual politician is rather a stiff, joyless guy who has to struggle with little popularity among the people, while his appointed double exudes joie de vivre, maybe even a little naivety and closeness to the voters. That's where the similarities end, however, and differences in principle between American and European cinema become apparent. For Viva La Liberta does not simply rely on the comedic effect created by the differences between the original and the double. Rather, the film is also a biting political satire and a thoughtful drama of self-discovery that takes plenty of time for quieter moments.

And that's a good thing, in that it makes it clear as the film progresses that Enrico isn't actually the bitter, stiff politician you meet him as at the beginning. And it also becomes apparent how much a person like Giovanni can be changed by his unaccustomed popularity. To be able to portray two very different people with their different facets in a believable way requires a really convincing and strong leading actor. Director Roberto And&ograve has found him in Toni Servillo (La Grande Bellezza). Servillo is allowed to reveal a wide range of his skills here, which he does so well that one is happy to forgive the film even its small lengths and dramaturgical hangs. Surely Viva La Liberta could have had a lot more bite as a satire on Italian (and European) politics. But with such a sympathetic cast, this shortcoming only carries half the negative weight.

It may sound a bit negative to call Viva La Liberta a nice film. But that's exactly what sums it up. The comedy is just not a cynical political satire, not a confusion joke with permanently fired laughter salvos, but a rather quiet, charming work to smile and like. Just nice. If you like unobtrusive European art house cinema with a mischievous wink, this is the film for you. If you expect a bitter reckoning with Berlusconi and his ilk, you will be disappointed. Below the line, this is clearly enough for a: worth seeing!