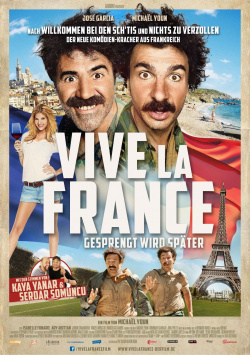 Dictator Adadat Ouechmagül (Moussa Maaskri) is desperate: the world seems to completely ignore his wonderful country of Taboulistan. While his people are absolutely devoted to him, the rest of the world simply doesn't care about him. Now that's about to change. Two suicide bombers are to fly to Paris and blow up the Eiffel Tower. When this symbol, so beloved the world over, is razed to the ground, Taboulistan will be known and will tremble in awe. Two goatherds, Muzafar (Jos&eacute; Garcia) and Feruz (Micha&euml;l Youn) are chosen as candidates for this important mission. However, although the two show great enthusiasm, they quickly prove to be completely unsuited for the job. First, the plane they are supposed to hijack and crash into the Eiffel Tower is diverted to Corsica. There, the two then put their foot in their mouths to complicate the onward journey to Paris. And when they meet the young journalist Marianne (Isabelle Funaro) and learn through her the many beautiful sides of France and of life itself, their mission threatens to fail for good.

Actor and director Micha&euml;l Youn, who was last seen in Germany in the comedy Kochen ist Chefsache alongside Jean Reno, tries his hand at satirical farce about terrorism and fanaticism in his second directorial effort Vive la France - Gesprengt wird später. The British director Christopher Morris proved in 2010 with his bitterly wicked comedy Four Lions that such a thing can work. Morris managed the feat of making fun not of religion and faith, but of misconceived fanaticism. Youn tries to strike in a very similar notch.

When the very strange customs and traditions in Taboulistan are introduced at the beginning, however, it first reminds more of a somewhat toned-down version of Borat, although the film can claim some really nice laughs here. And also later on, when the two goat herders have to make their way to Paris and, due to some cultural misunderstandings, clash again and again with people they would call French, the audience is quite amused. On the other hand, the humour in many scenes is too over-the-top and too focused on simple claptrap to even come close to the satirical nature of films like Four Lions.

For the German version, Kaya Yanar and actor/theatre director/musician Serdar Somuncu were hired. They were to guarantee that the wordplay of the original French version would carry over into the dubbed version. This decision was a good one, because the two of them deliver a very amusing dubbing. Nevertheless, they can't prevent that Vive la France - Gesprengt wird später in the end isn't as funny and biting as the film could have been. Instead of a wicked satire with cult potential Youn merely stages a standard slapstick with some small highlights, which can actually only be recommended to those viewers who like French humor of the somewhat overdone and hectic kind. For those, however, it is still worth seeing with a few minor reservations!