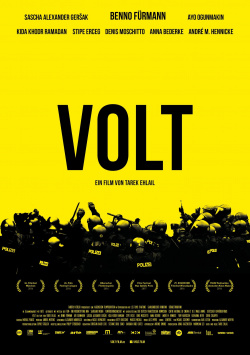 In the not too distant future, transit zones have been established all over Germany, where many thousands of refugees are waiting to be naturalized in their new homeland or to be sent back to their countries of origin. There is a tense atmosphere in the camps that is free of the law. Again and again it comes to brutal police operations, which are to provide for some peace. During one of these missions, policeman Volt (Benno Fürmann) kills the refugee Hesham (Tony Harrisson). The deed remains apparently unobserved. Yet Volt is more and more haunted by his guilt. They drive him back again and again to the camp, where the death of Hesham threatens to escalate the already tense mood. When Volt LaBlanche (Ayo), Hesham's sister, meets and develops an affair between them, he is drawn more and more into a dangerous maelstrom of lies and guilt. And soon the situation gets completely out of control…

"Volt" is well meant and ambitious. There's no question about it. In gloomy pictures, accompanied by a hammering industrial soundtrack, director Tarek Ehlail draws a depressing, uncomfortable picture of a Germany as it might look in a few years. Unfortunately, the good ambitions get lost in flat stereotypes and a somehow unfinished script. It is almost annoying that the members of the task force, of which Volt is a member, only seem to consist of drinking and racist thugs. The picture that Ehlail designs of the refugee camps also lacks a certain differentiation.

The story itself requires a very complex character development, which the film simply can't deliver in just 80 minutes. So the whole thing remains too superficial, emotionally undercooled and too striving to really captivate. The message that Ehlail might want to convey is also almost completely lost. Sure, in a way, the film makes you think. But first and foremost you have to ask yourself what the whole thing would have looked like if the script had drawn some less one-dimensional characters and the story had been worked out a bit better. There is still so much potential here that remains almost completely unused.

"Volt" is visually interesting and the sound also creates a not ineffective atmosphere. Nevertheless, the story simply doesn't succeed in developing the emotional impact it would actually need to function. Therefore there is at the best will only a very hesitant one: With some compromises still worth seeing!

Cinema trailer for the movie "Volt (Deutschland/Frankreich 2016)"
Loading the player ...