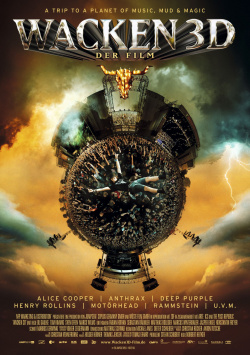 What began in 1990 as a small open air event in a gravel pit with six participating bands and just 800 visitors, is now one of the world's largest and most popular heavy metal festivals ever: The Wacken Open Air attracts every year not only up to 75.000 metal fans to the small community of 1800 souls in Schleswig-Holstein, but now also attracts the biggest names in the rock and metal scene to the stage. In 2013, festival-goers could choose from 135 bands, with everything from newcomers to big headliners represented. Of course, Rammstein, Alice Cooper, Motörhead, Deep Purple or Anthrax are not to be missed - all names that make metal hearts beat faster and ensure that tickets for the festival are now completely sold out in no time.

Just in time for the 25th anniversary of the Wacken Open Air, director Norbert Heitker is now bringing his documentary Wacken 3D, which was shot at the 2013 festival, to cinemas. With 140 staff, 18 camera teams and various co-directors, four days of the festival were spent following not only the metal greats on stage, but also three of the bands taking part in the Metal Battle young talent competition, as well as twelve festival-goers selected via Facebook. The result is an extremely entertaining festival film that captures the very special atmosphere of the Wacken Open Air very well.

However, no pure music film should be expected here. There is a lot of music to hear, but in the rarest cases the played songs are shown in full length. And when longer performances are shown, the song selection doesn`t really offer the big surprises. School`s out by Alice Cooper, Du hast by Rammstein or Smoke on the Water by Deep Purple are very obvious examples of what can be heard at this festival. It almost seems like the makers don`t want to scare away such audiences who otherwise have little to do with metal and want to offer them some familiar sounds.

On the other hand, of course, especially with such well-known hits the mood of the audience really bubbles up, which is why they are particularly suitable for the movie audience to get infected by them as well. This becomes especially clear during the bombastic Rammstein show, which is also one of the best 3D moments of the movie. When you see that and hear the audience's reaction, you can understand every star taking off a little.

With its motley protagonists, great concert footage and delightfully funny scenes from the festival grounds, Wacken 3D is a perfect complement to the Wacken documentaries Metallers Staring at Boobs and Cho Sung-hyung's surprise hit Full Metal Village. Whereas the village and its inhabitants were the focus there, the action in Wacken 3D takes place almost exclusively on the festival grounds. And what you can see there is extremely entertaining, visually outstanding and extremely atmospheric. Sure, one would have liked to see a bit more about the work that goes on behind the scenes, such as the construction of the stages. But that's really just complaining on a high level. The bottom line is that the film - at least from the point of view of a non-metalhead and festival layman - is a worthy declaration of love to the Wacken Open Air and an entertaining, humorous as well as rousing documentary that leaves its viewers in an extremely good mood. Despite some minor criticisms, it's clear to me that the 25th anniversary of the festival couldn't have been celebrated any better. Absolutely worth seeing