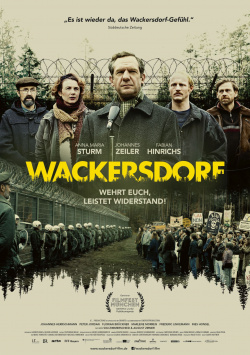 District Administrator Hans Schuierer (Johannes Zeiler) is desperate: His district in the Upper Palatinate is groaning in the early 1980s under increasing unemployment and lack of prospects. And there seems to be no solution to the problems in sight - until the Bavarian government approaches Schuierer with its plans to build a nuclear reprocessing plant in the community of Wackersdorf. This would bring many jobs and an economic upswing, which the region so urgently needs. The district administrator has reckoned with the fact that there will also be resistance to the plans. Despite some protests, he is fully behind the project. Until the Free State takes action without legal basis against the peaceful protests of a citizens' initiative to preserve the nature of their homeland. Now doubts arise in Schuierer and he begins to seriously question the plans. But in doing so, he automatically messes with the powerful Strauss government - and a small district administrator is no match for them after all.

Wackersdorf tells the true story of a now legendary protest movement, and while the film is set in the 1980s, its message for democracy and civic engagement against arbitrary political rule is more relevant today than ever. It would have been easy to stage this story as a one-sided protest march, a paean to anti-nuclear activists and a diatribe against politics and big corporations. In some ways, the film may be just that. But especially at the beginning, director Oliver Haffner strives for a much more nuanced view.

And this is where the strength of the political drama lies. Haffner traces very well why a local politician like Schuierer saw the construction of the WAA as a blessing for his district. Why many citizens also saw in it a long-awaited glimmer of hope. He shows very well how important it is to always look at both sides. Something that is being lost more and more these days. People who believe they are in the right, no matter which side they are on, hardly make the effort to look openly at the arguments of the other side or to listen to the fears and concerns of others and take them seriously. This creates rifts, aggression and alienation. What the film shows with the example of a small community in the 1980s can unfortunately be observed all over Germany today.

Now, of course, a film like this could easily have become a consternation drama, pregnant with a clearly positioned moral. But Haffner succeeds well in always incorporating a little humor, slightly cynical irony and a certain lightness in the dramaturgy, so that the film remains extremely entertaining over two hours despite a not exactly light topic. An entertaining, exciting and educational film that shows how important it is to stand up for one's own convictions, but also that it is no less important to think outside the box. An important piece of entertainment cinema and therefore also: Absolutely worth seeing!

Cinema trailer for the movie "Wackersdorf (Deutschland 2018)"
Loading the player ...