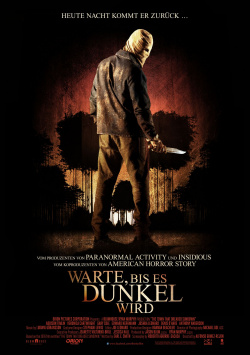 A masked killer haunted the small town of Texarkana years ago, just in time for Halloween, and made it famous nationwide. There was even a movie made about the brutal murders. The fact that it's shown at drive-in theaters every Halloween has long been a tradition, despite some protests. But this year, the fun festivities are turning bloody serious. The killer - or a copycat - seems to be back and wants to continue the killing spree. The first victim becomes the boyfriend of young Jamie (Addison Timlin), who is tasked by the masked killer to convince people he's back - or else she'll be his next victim. In order to survive, Jamie must get to the bottom of the mystery surrounding the earlier crimes - but this is not only extremely difficult, but also extremely dangerous. And it's not long before gallons of blood are flowing again in Texaekana...

Wait Until Dark is, on paper, a remake of Charles B. Pierce's 1976 slasher The Shifter. But what director Alfonso Gomez-Rejon, producer Ryan Murphy and screenwriter Roberto Aguirre-Sacasa, who have worked together before on the American Horror Story series, have directed here is very much more. Basically, they've taken a very conventional slasher story and simultaneously created a remake, a sequel, and an homage to the original. Footage from the original is cleverly woven into the story, and the making of the film and the fictional fate of its director also play a role in the remake. Those who know the original will enjoy the numerous quotes. But even those who haven't seen the 1976 version will be offered enough clues to draw a comparison between the original and the remake.

That admittedly doesn't change the fact that the story itself is rather ordinary. While the clever play on the original adds a certain charm, it's only part of what makes the film stand out a bit from the crowd of similar slashers. A significant part of that is the great work of cinematographer Michael Gio, who was also recruited from the American Horror Story team. The sometimes very original camera movements, the atmospheric use of color filters and the skillfully used cuts make the film on a visual level to a first-class genre representative.

There it is also not bad that hefty splatter scenes are served rather in moderation. But when it gets bloody, slasher fans get their money's worth. Acting, on the other hand, is rather average despite the always reliable Gary Cole, a surprisingly good Anthony Anderson and the cute Addison Timlin (Californication). Coupled with the somewhat weak finale, the overall impression, which is in itself very positive, is marred a little at the end. But even if Wait Until Darkness can't convince in all aspects, Alfonso Gomez-Rejon has delivered a first-class genre contribution, which not only interprets the rules of a remake in a completely new way, but also strides visually on pleasingly unusual paths. And for that there is a very clear: Absolutely worth seeing!