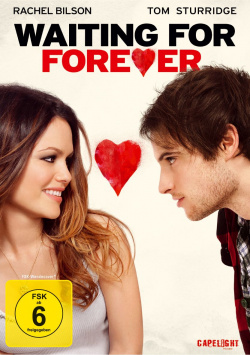 Contents: As children Emma (Rachel Bilson) and Will (Tom Sturridge) were inseparable. But that was many years ago and in the meantime they have lost sight of each other. But street artist Will has never forgotten his great love, who now lives as a successful actress in L.A., and has always stayed close to her. That's why he follows her to her old hometown when Emma's father (Richard Jenkins) falls seriously ill. Here, too, he actually only wants to look at them from a distance. But when she suddenly stands in front of him, the events take an unexpected turn...

When does love become obsession? Where is the border between romanticism and stalking? Is what Will feels really love - or an expression of a psychological problem. The little indie comedy "Waiting for Forever" deals with these questions with a mixture of humor and drama. Director James Keach, younger brother of acting legend Stacey Keach, has visibly tried to set his romance a little off the beaten track and entertain his audience with more unusual characters and a beautiful, not too conventional story. He succeeded in doing this quite well over long distances.

He already proved a good hand in choosing the two main actors. Tom Sturridge ("Radio Rock Revolution", "On the Road") is just as convincing as Rachel Bilson ("O.C., California", "Heart of Dixie") as an unfortunate Hollywood starlet as an eccentric street artist with a penchant for pyjamas. The chemistry between the two is very harmonious and Sturridge's play makes it easy to understand why Emma is attracted to Will on the one hand and a little afraid of him on the other when she learns that he's been around all the time.

Alongside the two main actors, Richard Jenkins and Blythe Danner, as Emma's parents, who are wonderful as always, deliver very charming performances. They also help to save the movie from some bumpy scenes, too. Towards the end, however, it becomes very clear that a more sophisticated script would have done the movie some good. Because the resolution of a dramatic conflict that could have even put Will in prison seems very rushed and the finale much less credible than the rest of the story. Keach could have invested a few more minutes in the last act in order to give his likeable movie a worthy ending.

Although the ending seems a bit superficial, the bottom line is a very positive overall impression, resulting from the charming actors, the successful mixture of restrained humor and drama, as well as the playful romantic story. So if you like small American indie romances with the flair of movies like "Garden State", you will also be enchanted by Emma and Will. Worth Seeing!

Picture + Sound: Since only one stream was available for the test, no rating can be given for the picture and sound quality at this point.

Extras: The DVD only has the trailer for the film as an extra.

Conclusion: "Waiting for Forever" is a small, charming romantic comedy, which is sometimes a little too exaggerated and far from reality, but can score overall with sympathetic actors and some magical moments. The humor is rather reserved and especially in the second half the movie becomes more of a drama. If you like little American indie comedies, you can take a look here. Recommended

Cinema trailer for the movie "Waiting for Forever - DVD (USA 2010)"
Loading the player ...