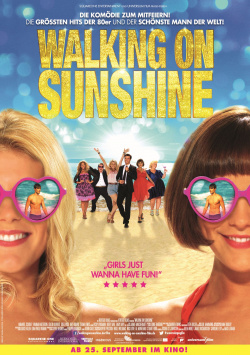 Her holiday fling three years ago with hot-blooded Italian Raf (Giulio Berruti) in Puglia was the best time in her life for Taylor (Hannah Arterton). But after she was allowed to float on cloud nine for a few days, the bitter crash soon followed. The young woman still hasn't recovered from it, which is why she can't quite look forward to returning to this place to enjoy her university graduation together with her sister Maddie (Annabel Scholey) and her friend Lil (Katy Brand). When she learns that Maddie, who really just wanted to get over her breakup with boyfriend Doug (Greg Wise) here, has fallen so madly in love with a local that she plans to get married in just a few days, Raf is momentarily forgotten. But only until Taylor finds out that her future brother-in-law is, of all things, the love of her life. When Raf confesses that he also has feelings for her, and then Doug shows up to stop the wedding, total chaos finally breaks out in picturesque Puglia.

Walking on Sunshine feels a bit like the BRAVO photo love story version of Mamma Mia. The catchy tunes of ABBA have been exchanged for snappy 80s hits and the wonderfully self-deprecating stars of the successful musical adaptation have been replaced by much more colourless and less talented young actors. This is quite nice to watch here and there and also makes some fun thanks to the songs, which should be known to everyone. But the spark that made Mamma Mia so popular with the audience just doesn't want to jump over here.

The success of the cinema version of the ABBA musical was not only due to the songs. Rather, audiences also had a blast watching acting greats like Meryl Streep and Pierce James Bond Brosnan make asses of themselves with their only marginally available singing skills and having a really good time doing it. It was this fun that was able to transfer to the audience as well, preventing Mamma Mia from becoming an embarrassing foreign shaming product. And that's exactly what Walking on Sunshine lacks. The cast, pop starlet Leona Lewis aside, aren't really gifted singers, making some of the songs sound shockingly flat. And when it comes to charisma, the good-humored ensemble is only partially convincing. Especially Hannah Arterton, sister of the clearly more talented Gemma Arterton, remains extremely wooden and pale throughout the film and the great romance between Taylor and Raf doesn't seem believable in any second.

The fact that the story uses countless clichés isn't a big deal in itself. After all, the movie doesn't want to be anything more than a feel-good romance with a high sing-along factor. But some clichés are just annoying, like the fact that there are only two (funny) fat people in the whole holiday resort, who of course have to find each other in the end. Because the fact that a slim person and a somewhat obese person find each other romantically is of course not allowed to happen in this clinically pure idyll. Anyway, the protagonists here are only reduced to appearances. Most of the women in the film, for instance, lose all ability to think rationally at the sight of tight male bodies and put their brains on overdrive - easily recognizable by their wide-open mouths.

Walking on Sunshine is thus hard to beat for superficiality in every respect. That said, of course, the film can still be fun. The pictures give off a perfect holiday feeling and the soundtrack puts you in a good mood - even if the interpretations of the songs are not always convincing. The story is harmless and nice and the actors colorless but somehow charming. If you don't mind the many clichés and just want to enjoy an extreme light version of Mamma Mia, you can definitely have a lot of fun here. And therefore there is then the pile of criticisms to the defiance still a scarce: with deductions worth seeing!

Cinema trailer for the movie "Walking on Sunshine (Großbritannien 2014)"
Loading the player ...