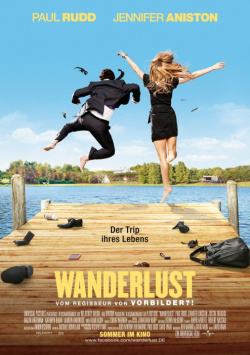 Wanderlust - The Trip of a Lifetime

Jennifer Aniston has done it again. After finally making a delightfully refreshing play against her image in Kill the Boss, she treads familiar ground again in Wanderlust - even if the comedy doesn't come across quite as well-behaved and demure as you've come to expect from other Aniston films.

Here, the former Friends actress plays New Yorker Linda, who has just bought a small apartment in the West Village with her husband George (Paul Rudd). It's a bold investment, but with George firmly expecting a pay rise and Linda anticipating sales of her documentary about penguins with testicular cancer, the couple are positive about the future. But then George loses his job and Linda's depressing film finds no takers either. And so the two have to move out of their micro-loft again before they've even properly unpacked their boxes and move in with George's pompous brother Rick (Ken Marino) in Atlanta. Along the way, they accidentally end up at the hippie camp Elysium, where the New Yorkers are confronted by nudists, free love, free-spirited thinking and all sorts of weird characters. At first, George and Linda are rather shocked by the community and aren't really sad to leave after one night. But after a brief, completely unnerving stay with Rick and his perpetually drunk wife Marisa (Michaela Watkins), they decide to give hippie life a second chance. For two weeks they want to try out this completely strange lifestyle and then finally decide about their future - two weeks in which their attitude towards life, but also their marriage will be put to many a hard test...

Wanderlust is a cooperation between director David Wain (Role Models?!, Wet Hot American Summer) and Judd Apatow (Virgin (40), Male, Seeking...), which sounds like a guarantee for amusing entertainment of the somewhat coarser variety. At the beginning the movie has some amusing moments to offer, starting with George and Linda's moving into their mini-apartment, the presentation of Linda's documentary and the first contact with the inhabitants of Elysium. Even though the initial situation for this comedy is not really new, it offers enough potential for some really good laughs.

But unfortunately, this potential is used all too rarely. That's because Wain and his co-writer Ken Marino, who also stars in the film as George's brother Rick, rely too heavily on male genitalia and crude sayings about sex being funny enough to carry an entire movie. As a result, they miss the opportunity to add a special touch to their story with cleverly amusing culture-clash moments or charming character sketches. Since it's more the small or understated moments that hold really good laughs, it becomes clear time and again that less could have been a lot more here.

In light of the successful gags and especially the inherently good actors, the overall impression Wanderlust leaves is all the more disappointing. Sure, there are truly worse US comedies with significantly less gag density. But the fact that Jennifer Aniston met her new lover Justin Theroux on set is actually the most interesting aspect of the film speaks volumes about its quality. Therefore, if you like your typical Apatow comedies, you'll be very entertained by many a moment here. But even then Wanderlust leaves a rather bland aftertaste, which ultimately makes this film only very conditionally worth seeing

Cinema trailer for the movie "Wanderlust - The Trip of a Lifetime (USA 2012)"
Loading the player ...