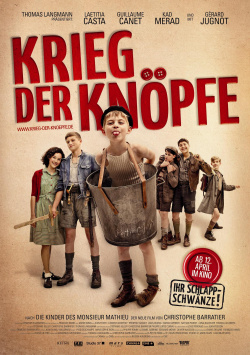 War of the Buttons

Louis Pergaud's autobiographical childhood novel War of the Buttons is rightly considered one of the great works of young adult literature and has been made into several films since 1937. In 2011, two French directors set out to bring their interpretation of the popular story to cinemas. While Yann Samuel's version is only released on DVD in Germany, The Children of Monsieur Mathieu director Christophe Barratier's adaptation also made it to our cinemas.

Barratier sets his War of the Buttons in 1944: War is raging between the villages of Longeverne and Velrans! What has been simmering for a long time finally erupts when the boys from Velrans call the two Gibus brothers (Clément Godefroy and Théophile Baquet) wimps. Lebrac (Jean Texier), leader of the Longeverne gang, calls for retaliation. And so the rivalry between the two neighbouring villages reaches a new climax. When the Longeverne boys come up with a very special war ruse, in which all the buttons of the prisoners' clothes are cut off as trophies, the war of the buttons has finally broken out. While there is a lot of fun behind the sometimes very serious conflicts, the adults are much more serious. Because the southern French village idyll is also caught up this spring by the cruel urges of the Second World War. In particular, new schoolgirl Violette (Ilona Bachelier), the niece of the beautiful Mademoiselle Simone (Laetitia Casta), seems to be facing the impending Nazi invasion with great trepidation. When Lebrac, who has been fascinated by Violette from the first moment he meets her, learns that the girl is hiding a dangerous secret, he must come up with a whole new wartime ploy to protect Violette: he must ally himself with the enemies from Velrans...

Christophe Barratier is first-rate at telling stories through innocent children's eyes without making the whole thing seem childish. In addition to proven performers like Kad Merad (Welcome to the Sh`tis) and Gérard Jugnot, both of whom were already in Barratier's last two films, it is then once again the wonderfully chosen child actors who make this version of the classic children's book first published in 1912 so successful. Whether it's the really cute Clément Godefroy, who as Little Gibus always provides a few laughs, or Jean Texier, who is convincing as the leader Lebrac, the children all act very credibly and not too overdone. This makes their adventures really fun not only for children, but also for adult viewers.

However, War of the Buttons is not simple children's fun. The film also has quite a few dramatic moments and gets to the heart a lot. True, it never reaches the level that Barratier achieved with The Children of Monsieur Mathieu. But the director proves once again that he knows perfectly how to mix a lot of fun and ambition into beautiful entertainment for the whole family. And exactly therefore also applies to this new War of the Buttons: absolutely worth seeing!

Cinema trailer for the movie "War of the Buttons (Frankreich 2011)"
Loading the player ...